Like most people with diabetes I seem to be on an endless quest for good-tasting food that won't play havoc with my blood sugar levels. What I keep looking for is food low in saturated fat, without any transfats, and packed with nutritious carbohydrates. 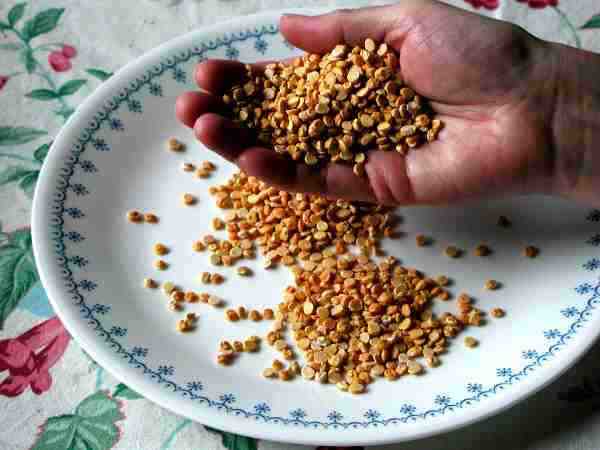 Chana dal, which is shown here, looks just like yellow split peas but is quite different.

The problem is that many foods high in carbohydrates send our blood sugar levels skyrocketing. But when I found the food of my dreams a couple of years ago, I ignored it because I had no idea what it was.

This food—chana dal—is practically unknown in the West, but is becoming available here too. Chana dal is a bean that comes from India, where they appreciate it very much.

My interest in chana dal began when I started gathering information for my Web page about the glycemic index, which ranks foods on how they effect our blood sugar levels. This index measures how much your blood sugar increases in the two or three hours after eating.

The glycemic index is about foods high in carbohydrates. Foods high in fat or protein don't cause your blood sugar level to rise much. But the problem, many experts believe, is that people with diabetes should limit how much fat and protein they eat.

A lot of people still think that it is plain table sugar that people with diabetes need to avoid. The experts used to say that, but the glycemic index shows that even complex carbohydrates, like baked potatoes, can be even worse.

Gathering studies for my glycemic index page, a couple of years ago I stumbled on references in the professional literature to something called "Bengal gram dal." I included it, although I didn't know what it was.

Then, someone sent me e-mail asking about it. My initial reaction was to take Bengal gram dal out of the glycemic index, because the number was almost unbelievably low. It has almost no effect on your blood glucose level. This is something that is very important to anyone with diabetes and to many other people as well. Technically, it has one of the lowest indexes of any food on the glycemic index, 8 (where glucose = 100). Its index is 5 according to one study and 11 according to another.

I didn't take it out of my glycemic index page—because I found an Indian market in Los Angeles. The proprietor told me that "Bengal gram dal" was the British English term for what is called "chana dal" in Hindi, a fact I've since confirmed. In Bengali it's known as "chholar dal."

This bean looks just like yellow split peas, but is quite different because it doesn't readily boil down to mush. It's more closely related to garbanzo beans, or chickpeas. The differences are that chana dal is younger, smaller, split, sweeter, and has a much lower glycemic index. But you can substitute chana dal for garbanzo beans in just about any recipe.

Chana dal has now become a regular staple of my household. I have diabetes and prize chana dal's very low glycemic index. And I prize the wonderful taste just as much. I love chana dal prepared in several different ways, just like any other sort of bean.

Chana dal may not be the end of my quest for tasty food that is good for me. Maybe scientists will invent the perfect food sometime in the 22nd century. Meanwhile, I keep on eating my chana dal and encourage you to try it too, whether or not you have diabetes.

Technically, chana dal (or Bengal gram dal) is, to use the Latin, Cicer arietinum. That is exactly the same name as that of garbanzo beans (chick peas), which of course has a lot higher GI. How is that possible? I have long assumed that they are different varieties. Actually, they are best described as different "market classes," according to Dr. Hans-Henning Mündel, research scientist (plant breeder) at Agriculture and Agri-Food Canada Research Centre in Lethbridge, Alberta, Canada. He says that chana dal is the group "desi," while garbanzo beans are the group "kabuli."

I was not precise enough for Dr. Mündel in the way I referred to chana dal and Bengal gram dal here. "'Chana dal' really would refer to the product (after splitting and/or cooking) made from 'chana'; i.e. the 'dal'," he writes. "The crop could properly be called 'chana' and alternatively, 'Bengal gram'. Saying 'Bengal gram dal' refers to the product, not the chick pea itself. While 'gram' is a collective term for grain legumes, similarly 'dal' is often used in Hindi as a general term for the grain as well as the product. My Indian colleagues assure me that you would, however, never say 'Bengal gram dal' for the grain, but only for the product."

According to e-mail from Dr. Richard M. Hannan, Research Leader/Horticulturist, USDA, ARS, NPGS, Regional Plant Introduction Station, Washington State University in Pullman, "In a quick nutshell, traditionally the large rounded or 'owl' shaped, cream colored chickpeas are called 'kabuli type', and all of the chickpeas with a tan, brown, red, green, black, etc. seed coat color are called 'desi type.' These terms are not from any scientific background, but rather adopted terms in the Middle East." He added in a subsequent message a possible explanation why the desi type has a lower glycemic index than the kabuli type: "The darker or colored ones do provide more crude fiber than the larger cream colored types."

There's more detail in a prepress print that Dr. Hannan sent me. It's a chapter, "Origin, History and Taxonomy of Chickpea," by L.J.G. van der Maesen, professor, department of taxonomy, Agricultural University, Wageningen, The Netherlands. Apparently "desi" in the Hindi name meaning local, used for the "small-seeded, dark-coloured chickpea," while "kabuli" is an allusion to the Afganistan capital Kabul, through which the larger Western group of chickpeas reached India about two centuries ago. Professor Van Der Maesen calls desi and kabuli separate groups of chickpeas, avoiding saying that they are different varieties. He says that the word "chana" comes from the Sanskrit term "chennuka" and that the Anglo-Indian name of chickpea, (Bengal) gram was derived from the Portuguese term for grain.

Dr. Mündel confirms this information. "As there are no genetic barriers to crossing among the two 'types' (or 'groups'), i.e. 'Kabuli' with 'Desi' —it probably best to realize that they are in the same species but have different enough appearance to warrant them being placed in different groups (of that species)," he writes. "And plant breeders can and do develop and release different varieties of each of those major types. Thus, Fred Muehlbauer in Pullman, Washington, has released such 'Kabuli' varieties, with resistance to aschochyta (a devastating fungal disease of chickpeas) as Sanford and Dwelly. These have become quite popular in Canada in the last couple of years. Over the next few years we expect to see more of the Saskatoon-developed (CDC) varieties to make more inroads: as seed is increased and these generally earlier-maturing, Canadian varieties, also with aschochyta resistance, become established."

"I wanted to mention one more thing," Dr. Mündel continues, "the meaning of the Hindi word 'Desi'. I did live and work in India for 3 years. 'Des(h)' - spelling depending on region and local pronunciation) actually means 'country'; specifically 'Desi' came to mean 'coming from the country', or 'coming from India'; and that referred, as an adjective, to a great deal of items (not just crops, let alone, just chickpeas). In connection with crops, it became used as a way to differentiate specifically bred varieties from those locally grown (i.e. we would say 'land races'): which were referred to as 'Desi'. Of numerous crops cultivated over eons (or at least millennia), thus quite a variability accumulated in 'Desi' material: by influence of environment and also local cultivators; so that 'Desi' varieties or lines from one area could have quite a different set of characters from 'Desi' varieties/lines in other areas. Also, 'Desi' varieties tended not to have the larger seed sizes often associated with conscious plant breeding (think of ancestral corn - e.g. teosinte and modern corn; or the primitive wheats and our modern bread or durum wheats). Thus I would imagine that the 'Kabuli' type resulted from conscious selection for larger seed size - and perhaps other characters as well (either consciously or inadvertently, such as characters associated with large seed size which may be linked closely on the chromosomes governing seed size: all just speculation on my part here). And this type became associated with Kabul, the capital of Afghanistan (either it was developed there and came from there to India; or first gained prominence in Kabul and area)."

The best and most useful data for the nutritional composition of chana dal is probably that developed by a team of Saudi and Pakistani scientists. They analyzed several samples of chana dal (desi) and garbanzo beans (kabuli). By far the biggest difference between the two varieties was that chana dal has almost three times more fiber than garbanzo beans. For the chana dal they reported that the mean values per 100 grams (on dry basis) were:

But an Indian study shows the composition of chana dal:

Now, since carbohydrates and protein have 4 calories per gram and fat has 9, this means that this amount of chana dal provides:

There is, of course, a rounding error of 3-4 calories. If we overlook this detail, this means that chana dal provides:

Tim writes, "While I was in Tesco ( Britain's largest supermarket) I checked on the nutritional information panel on the back of a packet of Chana Dal. It was:

Greg Adams writes to help resolve this inconsistency regarding the fiber content of chana dal. He says that crude fiber is just a fraction of the total fiber in food. "Crude fiber dates back to 1887, and the test on which it is based doesn't pick up a number of materials now recognized as being fiber," according to Dr. Roy Walford, Beyond the 120 Year Diet, p. 239.

I do know that one cup of cleaned, uncooked chana dal weighs 6.75 ounces. This is equivalent to 191.4 grams.

Here are some of our favorite chana dal recipes. Additional contributions gratefully accepted, tested, and posted!

Here are external links to other chana dal recipes that look great:

You may quote part of this page in on-line documents and written publications, but please notify me so I can add a reference and make sure that you add pointers to the places where people can get the latest version.

Permission to link this site to yours is not needed. Of course, I would be delighted to hear from you, especially if you have a new site that you think should be linked here.

I have no control over the content or continued existence of any external on-line resources linked here, and I therefore cannot guarantee that they will function as promised. The appearance of a site on this list does not imply any endorsement by me.

Since this information is constantly changing, readers are urged to email corrections and updates to me at mendosa@mendosa.com.

Go back to David Mendosa's HomePage