This New Meter Is Accurate and Can Be Yours Free

I hope you are already using a blood glucose meter, if you have diabetes or prediabetes. Using one of these meters is the only way that you can know how you are doing with the food you eat, the exercise you get, and the medicine you take may be sending your levels too low or too high.

Do you already have a meter? If you do, you may want to consider a new one. I remember an endocrinologist telling me 20 years ago that we should get a new one every year. Because the technology is much better nowadays, we probably can keep using a meter longer than that. But any meter can go out of whack — for example, if you drop it. And the newer ones keep getting better.

The new Jazz Wireless 2 meter from AgaMatrix of Salem, New Hampshire, is likely to be superior to the one you are using. It’s one of the most accurate and certainly the smallest blood glucose meter that you can use. It’s also one of the least expensive on the market. 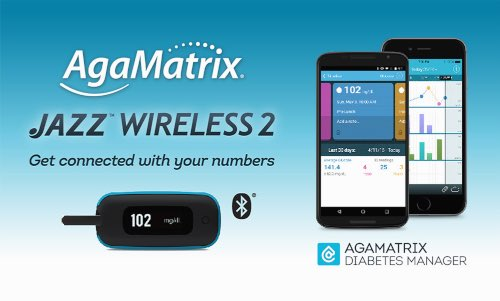 AgaMatrix isn’t one of the Big Four meter companies. LifeScan, Accu-Chek, Abbott, and Panasonic Healthcare (which early this year bought Bayer Diabetes) dominate the health insurance formularies, so many people with diabetes fail to look beyond them.

But AgaMatrix is no small company. It has made more than 6 million blood glucose meters. Between 2006 and 2012, I reviewed four of their meter models, and their meters keep getting smaller and less expensive. They have always been highly accurate.

Each of the AgaMatrix meter models uses what the company calls Dynamic Electrochemistry. It extracts a spectrum of information that traditional static electrochemical methods can’t. This new technology corrects for temperature, altitude, hematocrit, and test strip manufacturing variations.

The Jazz Wireless 2 meter exceeds the U.S. Food and Drug Administration’s accuracy standards. When your blood glucose level is less than 75 mg/dl, greater accuracy is more important than when it’s higher. So the FDA requires that 95 percent of the blood glucose test results fall within ±15 mg/dl. Almost 97 percent of this meter’s results met that standard. Leading meters from the Big Four didn’t perform as well in this study.

When your blood glucose level is more than 75 mg/dl, the FDA requires that 95 percent of the results have to fall within ±20 percent. All of the meter’s result met that standard.

I am still amazed that a meter this small can be so accurate. When I opened the package that AgaMatrix sent me so I could review it, I was stunned. It measures just 1.18 inches x 2.56 inches x 0.39 inches and weighs only 0.7 ounces. Only the company’s earlier iBGStar meter that it made for Sanofi was of equivalent size and weight.

But the iBGStar plugged into the earlier connector on iPhones. Because Apple made the connector smaller on its more recent iPhones, the iBGStar doesn’t fix current iPhones and is no longer sold in this country.

When the Jazz Wireless 2 meter becomes available later this month, AgaMatrix will offer it free of charge, Katie Daugherty, the company’s marketing director tells me. The strips will cost from $0 to $15 out of pocket for a 30-day supply, depending on your insurance coverage.

The meter uses Bluetooth wireless technology to connect with the AgaMatrix Diabetes Manager App, which is also free. The app runs on either IOS  (iPhone, iPad, or iPod touch) or Android devices. With it you can track your glucose, insulin, carbs, and weight all in one place and access it from multiple devices. You can also share your data by email.

When I received my meter for review, I read all the paperwork that came with it. One page says that we should use control solutions when you “first get your meter” to be sure that it is working properly.

However, no control solutions came with it. So I called AgaMatrix customer service, and a friendly and knowledgeable representative sent me the control solutions at no cost and told me that they will send them free to any AgaMatrix meter user who asks for them.

Having diabetes means that you need to be constantly mindful of everything you eat, your activity, your medication, and more. This can seem overwhelming at times, but careful diabetes management can also lead to better health. Knowing your blood glucose level is the key to managing your diabetes, and the new Jazz Wireless 2 meter makes that easier.

When is the best time of day to test?