Metformin, the most popular diabetes medicine, figured in about 200 of the presentations at the recent annual convention of the American Diabetes Association. Two of these presentations show good news for its likely role in degenerative nerve disease and in dispelling concerns about its possible role in neuropathy. One presentation, however, brought some disturbing results, and the rest are of less interest to most people with diabetes.

This convention, which the ADA calls its 76th Scientific Sessions, attracted more than 16,000 attendees, including more than 13,000 professionals who went to New Orleans to see and hear almost 3,000 presentations about diabetes. I represented HealthCentral there. 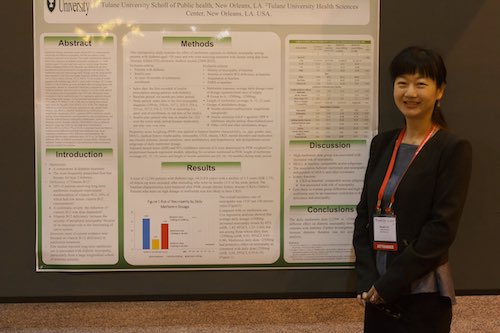 A team of researchers from Tulane University’s School of Public Health and Tropical Medicine presented one poster and one oral presentation about metformin. Shuqian Liu, MD, presented the poster and told me that she designed both of these studies. The poster 570-P reported a retrospective study that examined the effect of high doses of metformin on neuropathy, a complication for 60 to 70 percent of people with diabetes.

This has been a concern because previous studies had showed that metformin decreases vitamin B12, which may be linked to neuropathy. Using data from Veterans Affairs electronic medical records for 2004 to 2010, the study compared the effects of high and standard doses of metformin on neuropathy among more than 12,000 veterans who have diabetes.

But only an average daily metformin dose of more than 2500 mg was associated with an increased risk of neuropathy. Few people with diabetes take that much because the daily maintenance dose is 2000 mg.

Even better news for people taking metformin came out in the companion study 72-OR that the Tulane team presented. This study was the oral presentation by Qian Shi, a PhD candidate at Tulane.

Like the team’s study of metformin and neuropathy, this study also used VA records for 2004 to 2010, this time studying more than 6,000 veterans to determine if the length of metformin treatment for people with Type 2 diabetes has a protective effect against degenerative nerve diseases.

These diseases include Alzheimer’s, cognitive impairment, dementia, Huntington’s, and Parkinson’s, all of which are incurable. During the follow-up, which averaged 5.25 years, 334 of these veterans were diagnosed with dementia, 100 with Parkinson’s, 71 with Alzheimer’s, and 19 with cognitive impairment. The study concluded that while metformin treatment of less than 2 years didn’t show any significant influence, the longer the metformin treatment beyond 2 years the less likely they had any of these degenerative nerve diseases. In this group metformin “has protective effect” against these diseases.

On the other hand, the symposium “Metformin Revisited 2016 — New Insights, New Directions” first attracted me to the convention when the ADA featured it in its  preliminary program. But it failed to generate any important positive news. The first of these four talks was a highly technical one reviewing the many actions that metformin has within the gut. The second largely overlapped my article here two months ago, “Metformin Safe with Reduced Kidney Function.”

The third one, a talk by Oxford Professor Rury Holman, reviewed the “inconclusive evidence” that taking metformin can reduce heart disease. The GLINT trial, which is just getting underway, “will hopefully bring clarity.”

The fourth of these talks reviewed the possible benefit that metformin can have on cancer risk. Michael Pollak, MD, of McGill University, noted earlier findings that people taking metformin had unexpectedly low rates of cancer death and cancer incidence compared with people taking other diabetes drugs.

That might turn out to be especially encouraging news. Meanwhile, however, the one presentation about metformin that disturbed me is its role in cardiorespiratory fitness. Exercise helps people with diabetes to avoid heart disease.

Sheliza Lalani, MD, told me that the poster 736-P that she presented shows that when people with diabetes take metformin, “you are not able to get up to the maximum ability of exercise — metformin makes exercise harder.”  More technically, the poster states that “some evidence suggests that metformin may attenuate aerobic capacity.”

Both these positive and disturbing presentations are important because they are leading edge findings. On the other hand, they are the type of study that can’t control for all the variables, one or more of which could account for the findings. They are also preliminary evidence, not yet reviewed by peer-reviewed journals. However, Dr. Liu told me that her team is currently submitting both of their studies to one of these journals.