Keep Off the Weight

If you haven’t lost weight or need to, feel free to skip to the next article. But 85 percent of those of us who have type 2 diabetes are overweight, and most everyone else is probably on a diet.

I’ve lost a lot of weight in the 14 months I have used Byetta. Now, nothing scares me more than gaining it back.

Except for surplus pounds, before Byetta I had nothing to lose and therefore nothing to fear. In that one respect I was like the good King Henry the Sixth of whom Shakespeare had the Earl of Warwick say, “having nothing, nothing can he lose.”

Success is scary. When we lose weight, we are working against our own metabolism, our set point.

Exercise helps us to keep the weight off, but we have to do a lot of it. That’s one reason why I have stepped up the lengths of my hikes.

Another reason is that now that the winter snows here at the foot of the Rocky Mountains have mostly melted away, the trails are open. And if winter is over where it’s more than a mile high, it must be almost spring where you are too. 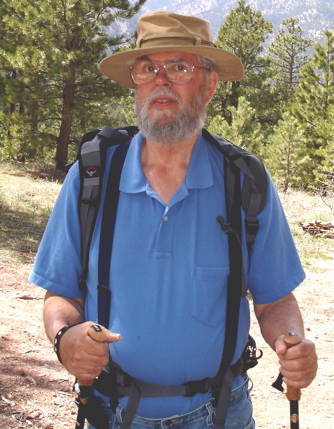 I never liked any form of exercise that requires a lot of equipment. But it’s not generally a good idea to go naked into the woods. I haven’t done that since hiking in the Dolly Sods Wilderness in the 1970s. Besides normal clothes, we need boots to protect our ankles and to give snakes some leather to hit when they strike.

Clothes and boots I had. But I needed a new daypack to replace an old one that kept coming off of my shoulders. I also replaced my walking staff with a pair of hiking poles and my plastic canteen with a stainless steel one that gives water a much better taste.

Now I hit the trail for long hikes almost every day. It’s for maintaining my weight loss and for my health – and for my pleasure. Ever since I was an 8-year-old kid living in the San Gabriel Mountains of California, I have hiked for the sheer joy of it.

Hiking isn’t for everyone. Almost all the people I meet on the trails whiz along on their mountain bikes. That’s too much equipment for me and too fast for me to enjoy the scenery. I meet more joggers than hikers too. But my knees won’t take the strain of jogging any more, and I doubt if jogging is doing anything good for their knees either.

Others can’t hike. But all of us can get the exercise of our choice. Think swimming and water aerobics.

Whatever our favorite exercise is, we need to do a lot of it if we want to keep off the weight we’ve lost. New research in this month’s issue of The American Journal of Clinical Nutrition shows that the standard physical activity recommendation of walking 30 minutes per day is just not enough.

We need at least seven hours of exercise a week, and maybe even more. This corresponds to about 2100 calories per week.

The new research compares how 202 overweight adults did when half of them followed standard recommendation and the other half followed a program of working out 2500 calories per week. After 30 months, those people who sustained the higher exercise level of 2500 calories per week had significantly more weight loss than did those exercising less.

Thanks to one of my favorite Certified Diabetes Educators, Karen Lavine in Albuquerque, for sending me a copy of this study. I am now more certain than ever that my long hikes are something I need to keep making – now that I have something besides weight to lose.

Walk Away Your Diabetes

Get Fit Fast with Diabetes