No wonder that I’m so healthy and happy lately! I just got back the results of my omega-3 test, and they were quite satisfactory.

In December I wrote in “Testing Omega 3” about the HS-Omega-3 Index that uses a standardized methodology to measure the percentage of eicosapentaenoic acid (EPA) plus docosahexaenoic acid (DHA) in our red blood cells. It also measures the ratio of omega 3 to omega 6. In that article I gave a brief review of some of the reasons why I think that omega-3 is crucial to our diet — and deficient in the diet of most people who have diabetes.

On January 27 I ordered my test from GeneSmart, and I got my results in today’s mail.

A “desirable” level on the HS-Omega-3 Index is over 8 percent. My level came back as 12.6 percent.

The only advice that GeneSmart was able to offer me was to maintain my intake of the omega-3 fatty acids, EPA and DHA. I will.

But in the packet they did include a nice set of tables about fish and their omega-3 content. Here is a copy: 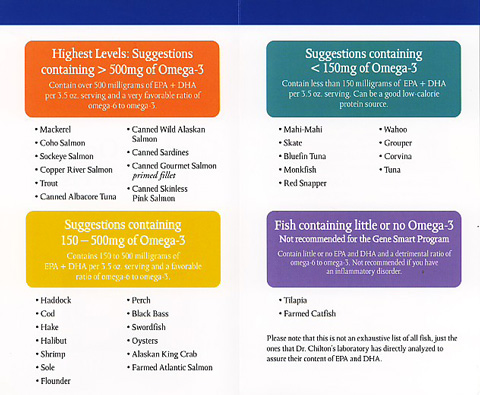 I get my omega-3 levels from eating fresh or frozen (not farmed) cold-water fish about five times a week. I prefer king salmon and Chilean sea bass — technically Patagonian toothfish — which tastes a whole lot better than it sounds. I usually add canned salmon, sardines, or albacore tuna — packed in water, not oil — to my salad at lunch. Sometimes I add a small can of anchovies, which I have been able to find only packed in oil, which I drain off. I also supplement my omega-3 from krill oil, which I wrote about here exactly two years ago at “Krill Oil.”

In addition, I minimize the amount of omega-6 I consume. More later about how important this is and what to avoid.

Another company, Lipid Labs, also offers an omega 3 test. An anonymous commenter told us about its temporary free promotion on December 7 and I immediately signed up for it. I waited and waited for it, wanting to take both tests at the same time. But the Lipid Labs test kit never arrived in the mail. Finally, on February 1, Douglas Bibus, Ph.D., the head of the company, wrote me:

“Very sorry that your kit has not been sent out yet,” his message said. “We have had a HUGE response to our offer and are awaiting more kits. There has been a back order on the blood spot kits that has prevented up from getting kits out. I hope to have these kits in this week and out next week. We have ended our free offer but are offering the test for $69.99 until our full site is up and running.” The site is www.omega3test.com.

But I don’t know how or if the Lipid Labs test is standardized. The test that GeneSmart offers is.

And readers of this article can get a big discount on the GeneSmart test. Keith Wakeman, the CEO of Gene Smart Wellness, just wrote me:

Feel free to share this GeneSmart.com coupon code with your readers that will save them $60 on the Gene Smart Omega-3 Blood Test, so their final cost will be only $69.95. As a bonus, they’ll get a free bottle of omega-3 supplements. We can only offer this super-deep discount for a short-time and it will expire on Sunday February 14th.

We have the two companies that can test our omega 3 and omega 3:6 ratio dueling! This email from Doug Bibus, Ph.D., of Lipid Labs just came in:

“We would be happy to offer your group testing for $50 a sample. Just have them enter “Mendosa Friends” on the supplement question line.

“Our test is ‘standardized’ based on our own rigorous validation standards. We are one of the most experienced fatty acid analysis labs in the country and are relied upon by academic researchers, food companies and drug companies like Merck, Lilly, GSK…. Our lab is an off shoot of our U of MN lab and our founder, Dr. Ralph Holman invented “Omega 3” and discovered their definitive essentiality, metabolism and competitive interactions with omega 6. Dr. Holman is truly the Grandfather of Omega 3 and also the namesake of our omega 3 test, The Holman Omega 3 Test. We have analyzed tens of thousands of samples from all around the world.

“GeneSmart subcontracts their analysis to another lab. They do not perform omega 3 analysis. They are not experts in analysis and only offer a limited look at a total fatty acid profile. We have had thrid party validation of our methods versus the lab that GeneSmart uses and on identical samples, our lab reported much higher values of omega 3 for high end omega 3 samples like yours. There are no clinically standardized methods for this assay and the presence of heme iron in red cells makes this type of analysis complex for those less experienced. Heme based iron can rapidly degrade EPA and DHA in the aggressive chemical environments used during their analysis.

“We will manitain our promotion for your blog participants until the end of March.”

In a recent article I attributed my happiness to one of five strategies I am following. I guessed that having good omega-3 levels was one of the reasons. Now I am even more happy to know that my guess was right.

Did you get your omega-3 level tested yet? If so, please let us know how you are doing and what you are doing to improve it, if that’s what you need to do.

The Excursions You Don’t Want To Take