Did you think that saturated fat isn’t good for your health? Actually it is both healthy and satisfying.

A new study by Norwegian researchers that The American Journal of Clinical Nutrition published at the end of November 2016 debunks the urban myth that you need to minimize how much saturated fat you eat. The researchers at the University of Bergen found strikingly similar health effects of diets based either on carbohydrates or on fats. 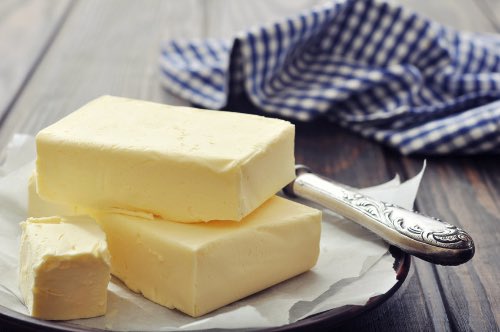 In their randomized controlled trial, 38 men with abdominal obesity followed diets that were high in either carbohydrates or fat, of which about half was saturated. The men in the study had normal fasting glucose.

Only the abstract of the study is online, but the corresponding author, Simon N. Dankel, Ph.D., sent me a copy of the full text. He is an assistant professor in the Department of Clinical Science at the University of Bergen.

“I would especially like to draw your attention to the rigorous design of our study,” Dr. Dankel said in an email. “We matched the food types as well as energy (within normal range), protein, and polyunsaturated fatty acids, making for a more clear-cut comparison of carbs vs. fat.”

“The very high intake of total and saturated fat did not increase the calculated risk of cardiovascular diseases,” said Ottar K. Nygård, M.D., Ph.D., a professor in the Department of Clinical Science at the University of Bergan and cardiologist, in a press release from the university. He was a coauthor on the study.

Saturated fat had been thought to promote cardiovascular diseases by raising the “bad” LDL cholesterol in the blood. But even with a higher fat intake in this new study compared to most comparable studies, the authors found no significant increase in LDL cholesterol, while the “good” HDL cholesterol tended to increase.

“These results indicate that most healthy people probably tolerate a high intake of saturated fat well as long as the fat quality is good and total energy intake is not too high,” Dr. Nygård said. “It may even be healthy.”

The relevance of this study for anyone who has diabetes is important, yet not obvious. But why can’t we just boost the protein and skip the fat?

Only fat and carbs give energy

The big problem is that protein wouldn’t give us the energy we need. Only carbohydrates and fats provide that. We can get our total requirement of about 130 grams of energy that we need per day either from fat or from carbohydrates or some of each. Carbs raise our blood glucose levels, but fats don’t.

Another problem is that the extra protein above what we need each day would just raise our blood glucose level. Adult men need 56 grams of good quality protein per day and most adult women need 46 grams, according to the Food and Nutrition Board of the National Academy of Medicine. Our bodies can’t use much more than this.

For about half a century, our collective fear of fat has stopped the safest and most effective way to manage diabetes. For the first 13 years after my type 2 diabetes diagnosis in 1994, my own fear of fat stopped me from eating low-carb. This made my tight blood glucose control and weight management impossible without using diabetes drugs.

This fear is probably also the basis of the twin epidemics of diabetes and obesity that already plagues the U.S. and increasingly threatens the world. Even now, the medical establishment warns us to minimize how much fat we eat, especially saturated fat.

Our fear of fat, especially that of saturated fat, is unsupported by science. In 1956, Ancel Key launched the “Seven Countries Study,” which started the demonization of saturated fat. This study was, however, fatally flawed. It cherry-picked data that fitted the author’s preconceptions, ignoring data from more than a dozen other countries that didn’t support what he was trying to prove.

Nevertheless, this “Seven Countries Study” became official U.S. policy in 1977. In that year, the U.S. Senate Committee on Nutrition and Human Needs issued nutrition guidelines for Americans that encouraged us to eat less fat, less cholesterol, less refined and processed sugars, and more complex carbohydrates. Published as “Dietary Goals for the United States,” these guidelines are known as the McGovern Report, after the committee’s chairperson, Sen. George McGovern.

It changed my life

More than any other single event, these guidelines set our obesity epidemic in motion. Except for sugar, these guidelines were wrong, as Gary Taubes argued so persuasively in Good Calories, Bad Calories that it changed my life. Only after I studied this book when it came out in 2007 did I dare to begin to follow a low-carb high-fat diet. Today, we have even more persuasive evidence that a high-fat diet is safe.

Omega-3 for Vegetarians with Diabetes