With this Meter You Will Just Press Once

It may be the biggest step forward in blood glucose meter technology in years. It is the Pogo Automatic Blood Glucose Monitoring System, and the company that makes it is Intuity Medical in Sunnyvale, California.

The company just received clearance from U.S. Food and Drug Administration to market the Pogo meter here. When we will finally be able to get our hands on one, we will have the quickest, simplest, most discreet blood glucose meter ever made. It’s taking a long time, but it will be worth the wait.

In fact, we will still have to wait a few more months to buy one. Robin Gaffney, Intuity Medical’s Head of Marketing, tells me that they plan to launch the Pogo sometime next year. They haven’t finalized pricing nor have I yet been able to get a device for review. 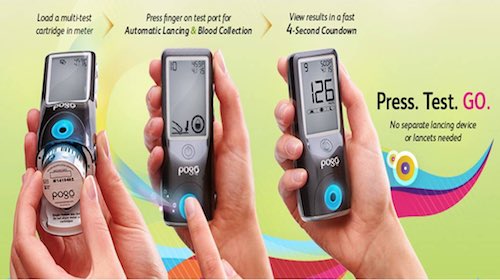 But I still remember how impressed I was when I saw a prototype of the Pogo almost eight years ago at the American Diabetes Association’s annual convention in San Francisco. In fact, as long ago as April 2003, in my “Blood Glucose Meters” directory I listed Intuity Medical by its former name, Rosedale Medical, as working on a blood glucose meter. So I asked Ms. Gaffney why it took Intuity Medical so long to get FDA clearance for its first meter.

“We submitted the Pogo Automatic Blood Glucose Monitoring System in fall 2015,” she told me. “So it took approximately eight months. Before that, we took the necessary time with the FDA to educate them on this unique and unprecedented technology, while also using the time internally to further finalize the technology and conduct clinical research with patients. There’s a lot of engineering work behind creating an easy, one-step testing solution like Pogo!”

Intuity Medical’s website has a page, Hassles of Testing, that clearly shows how you have to take 16 to 20 separate steps to check your blood glucose when you use any other meter. The Pogo reduces this hassle to the absolute minimum — one step. This simplicity will help you the most when you have to test in a public place, especially in a crowded one like public transportation or a theater. Also, if you have to test several times a day, I expect that you will also appreciate how easy testing will become.

With the Pogo all you will have to do is to press the test button. The Pogo will automatically draw blood from your finger, collect a blood sample, and display a result.

Even better, this meter needs only 0.25 microliters. The company tells me that it doesn’t know of any other blood glucose meter that can provide a glucose result with such a tiny blood sample. Even Abbott’s FreeStyle meters, the current leader, take a bit more.

Surprisingly, for such a complete metering package, the Pogo will be quite small. “It’s shorter than an iPhone 4 and weighs less,” Ms. Gaffney says.

“It can easily fit in a pocket or purse,” she says, “and doesn’t require the use of a zippered case since all supplies are contained within the cartridge, which is in meter.” She says that they also designed the Pogo to be used with either hand.

While an integrated meter called the Mendor Discreet has been available in Europe for the past five years, the FDA has never approved it for sale in the United States. The Pogo is smaller and also automates the entire testing process without making you change lancets or dispose of used test strips and used lancets separately.

One of the company’s pre-marketing studies of the Pogo asked 287 people to compare it to their current meters. Nine out of 10 preferred the Pogo.

The name of the meter came from this research with people with diabetes. “We presented several options to them,” Ms. Gaffney told me. The name Pogo “magically bubbled up from the discussions.” You can think of it as standing for Press Once and GO.