When we eat chocolate, those of us who have diabetes may be able to reduce our insulin resistance and prevent the memory loss that leads to Alzheimer’s Disease, which some scholars are beginning to call type 3 diabetes. 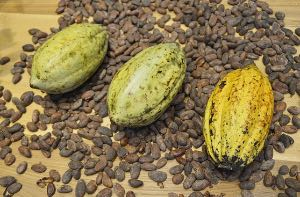 Chocolate comes from cocoa beans, which for a good reason has the scientific name meaning “food of the gods.” That’s because the Aztecs, who domesticated it, saw it as a sacred plant, and reserved it for their royalty.

Nowadays, all of us peasants consume chocolate with abandon as one of our favorite foods. But while chocolate candy may taste awfully good, it isn’t good for us. It is usually high in sugar and low in the healthy part of cocoa, which is the flavanols. Cocoa’s usual processing method, generally called the Dutch process, strips the flavanols from cocoa.

Recently, quite a few studies have shown that the flavanols in cocoa beans helps people prevent memory loss and have better insulin sensitivity. Flavanols are a form of flavonoids, the beneficial plant-based nutrients that are found naturally in cocoa as well as in red wine and black and green tea. Cocoa is one of the richest sources of flavanols. Researchers have found that largely by improving insulin sensitivity these flavanols reduce our loss of memory.

Memory loss, which the researchers call “cognitive dysfunction,” can lead to dementia, including Alzheimer’s Disease. This is the dreaded disease of aging that is so common among people with diabetes that some doctors now call it type 3 diabetes.

A 2011 study of more than 1,000 adults in a suburb of the Japanese city of Fukuoka found that the people with diabetes had slightly more than twice the chance of getting Alzheimer’s Disease as those who passed the glucose tolerance test.

It was 10 years ago that Dr. Suzanne M de la Monte, a neuropathologist and professor of pathology at Brown Medical School, who initially made the connection between diabetes and Alzheimer’s Disease. Writing in the Journal of Alzheimer’s Disease, she proposed the term type 3 diabetes. Dr. de la Monte has followed up with five more studies in professional journals.

But a new study by these Italian researchers that appeared in the March 2015 issue of The American Journal of Clinical Nutrition makes the most persuasive case for us to eat chocolate. The authors randomly assigned 90 volunteers into three groups that drank either low, intermediate, or high amounts of cocoa flavanols. Eight weeks later those people who drank intermediate or high levels showed clear improvements in their memory and had improved insulin sensitivity. In fact, the biggest contribution to their improved memory was because of their changes in insulin sensitivity.

“The evidence of an influential role of the improvement of insulin resistance on the amelioration of cognitive performance that we have observed is quite interesting,” the corresponding author of the study, Giovambattista Desideri, a professor at Italy’s University of L’Aquila, wrote me. “It fits with a growing body of evidence suggesting a pathophysiological role for insulin resistance in cognitive dysfunction. Although only few patients in our study had type 2 diabetes, our data provide some encouraging evidence that the improvement of glucose metabolism could represent a therapeutic target also for nutritional intervention to counteract/prevent age-related cognitive decline.”

Because I have type 2 diabetes, this research inspired me to discover the best way to get the flavanols I need from chocolate. The results of that quest follows in my next article.

When You Want to Avoid Eating It All