S is for Supplements

Practically every day the media reports on another new herb, vitamin, or mineral that supposedly will help us control or even cure our diabetes. It’s been almost impossible even for people who try to keep up with diabetes developments to know which of these supplements might help us.

A new book released at this June’s convention of the American Diabetes Association in Chicago provides the first solid ground to answer these questions. I love to shop in bookstores, and one of my favorites is the bookstore that the ADA sets up at its annual meeting. This year by far the most interesting new book was one by Laura Shane-McWhorter, PharmD, a professor at the University of Utah’s College of Pharmacy.

The ADA had just published Dr. Shane-McWhorter’s book, Complementary & Alternative Medicine (CAM) Supplement Use in People with Diabetes: A Clinician’s Guide. I got a chance to talk with her briefly in Chicago as she signed copies of her book. Later, after I read her book and when we both got back to our desks, we had a chance to talk at length about her book in particular and complementary and alternative medicine in general. 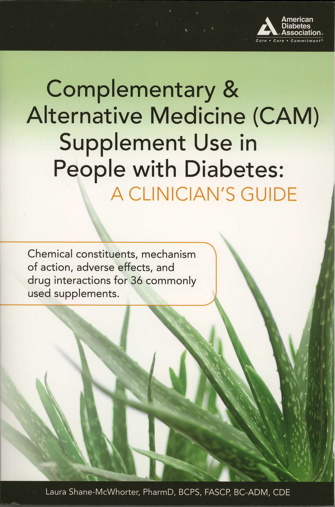 It’s about time that professional organizations like the ADA recognize the importance of CAM. People with diabetes are 1.6 times more likely than others to use these treatments, Dr. Shane-McWhorter writes. And fewer than 40 percent of us us tell our health care providers than we use them, even though many of these supplements interact with prescriptions.

I am one of the minority who tells his doctor about my supplements. I take so many supplements for diabetes and other conditions that I have a long list that I keep in my wallet to hand out to every doctor’s office that I visit.

Dr. Shane-McWhorter’s new book includes substantial chapters on 36 commonly supplements that people with diabetes commonly use. Of course, the evidence for these supplements is not equally strong.

Of the supplements that she writes about, I use quite a few. They include cinnamon (although mostly for the taste, not as a supplement), psyllium (for its fiber), stevia (as my sweetener of choice), milk thistle (for my liver), magnesium (because people with diabetes are often low in this mineral), coenzyme Q10 (for my heart), alpha-lipoic acid (a potent antioxidant that may help my liver and may prevent neuropathy), ginkgo (to improve circulation, prevent retinopathy, and improve my memory), and fish oil (for my heart).

The book also reports extensively on the other major supplements that other people with diabetes take. These include gymnema, fenugreek, bitter melon, ginseng, chromium, policosanol, and red yeast rice.

I don’t take those. But I do take one supplement for diabetes that Dr. Shane-McWhorter doesn’t include in the book. It is benfotiamine, which I wrote about in several articles here, most extensively here last September.

She told me that as she prepared the manuscript for her book, “Benfotiamine was not on the radar.” But there are now several studies that indicate it may be useful in preventing retinopathy and advanced glycation end products (AGEs).

I asked Dr. Shane-McWhorter to include a chapter about benfotiamine in the next edition of her book. “I hope there will be another edition,” she told me, “and if I get that opportunity I will include bentfotiamine. When I was writing this book, I wasn’t sure what to include, since hundreds of products have merits. It turns out that benfotiamine may help glucose stay in the normal pathways.”

One of the most important things that she told me was how CAM relates to the prescription medicines that almost all of us take. It happened that just before my scheduled interview with Dr. McWhorter, a correspondent wrote me about alternative medicine.

“I don’t want medications that shake down my pancreas,” this correspondent wrote. She wanted alternative herbs instead.

“But complementary and alternative medicine is a medication,” Dr. Shane McWhorter replied when I passed on my correspondent’s request. “Many people believe that these products are not drugs, but they have pharmacological ingredients.” She said that for example we got both metformin and aspirin originally from herbs.

Note the sub-title of the book, “A clinician’s guide.” That’s important because the intended audience is health care professionals, not lay people like you and me.

What’s the difference? Money. Professional books sell for a whole lot more than what they can expect to get from us. In this case the ADA is asking $39.95 for the book in the U.S. On the other hand, investing in it could save you a lot of money and grief.

Two Pills You Can Skip