My wife, Catherine Lee Nord, died Tuesday morning of liver failure. It was a complication of her diabetes. She was 69. We had been married for 11 years. 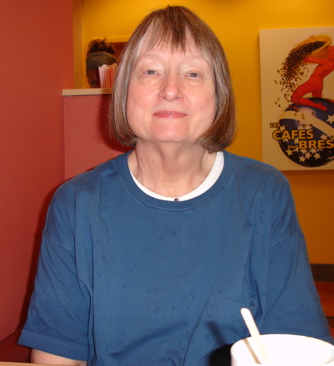 She died in the intensive care unit of the University of Colorado Hospital in Denver. Yesterday we buried her in Boulder’s Mountain View Cemetary. Jewish tradition teaches us to bury our dead as soon as possible out of respect for the dead.I last saw her alive at the ICU on Saturday. She cried when she told me that she would never see her beautiful home again. I told her that she would see her beloved dog, a two-year-old Akita named Ember. I was wrong. She didn’t see either again.Catherine’s liver failed because of blood clots that originally developed in her portal vein. The blood clotting was a consequence of the type 2 diabetes that she had fought for a quarter of a century.Ever since May 1998 she was living on borrowed time. I still remember her terrible moans just before I took her to the hospital emergency room for the third time in a week. The first two times they weren’t able to find what was wrong and sent her back home.At that time I was working on my first consulting contract with the Joslin Diabetes Center. Ironically, I am now working on another consulting contract with Joslin.Finally, I called an ambulance very early on the morning of May 13, 1998. They took her to our local hospital, Dominican Santa Cruz, near where we then lived. After blood tests showed an infection (white blood count of 25,000) and x-rays showed enlarged intestines, they performed an emergency operation. The surgeon removed almost all of her small intestines, leaving just 20 inches of the jejunum, 6 inches of the terminal ileum, the duodenum, the colon, and the ileocaecal valve. They call it a mesenteric infarction.Catherine and I had one of the first Internet marriages. We met on the old Diabetic mailing list at Lehigh University at the time when Dr. Arturo Rollo managed it. I told our story in Two Types magazine, which is no longer published, and on my website.Until the past couple of months when she was too weak, Catherine was always the first person to edit everything I wrote. She was indispensable to me in so many ways.She was born near Minneapolis on July 15, 1937, and graduated from the University of Minnesota. After teaching for a couple of years in Minnesota, she moved with her first husband to the San Jose area of California, where she earned two master’s degrees from Santa Clara University. She taught in California schools for 29 years, mostly at Alum Rock Elementary School in San Jose, where she loved teaching special education students. She retired just before we got married.If you would like to make a contribution in her name, the most appropriate non-profit would be the Joslin Diabetes Center. They have an email form. Or you can call 1 (617) 732-2400 or mail them at:Joslin Diabetes CenterOne Joslin PlaceBoston, MA 02215

Our Children will Rebel against Diabetes