Love on the Internet

When I answered Stephanie's message in October 1994, I really was trying to help, but I was only joking that I was available. I had no idea that Catherine would respond nor what that would lead to.

I had been divorced since 1981 and was enjoying my independence very much. I owned my own place and worked as a freelance writer, so I didn't answer to anyone.

What wonderful news this would be!

Life had been so easy that I put on more than a few pounds. Then, suddenly in February 1994 my life changed when my doctor looked at the results of a routine Hemoglobin A1c test that he had ordered for me. He said that it was 14.4, showing a dangerously high level of glucose in my blood, and asked me, "Has anybody ever told you that you have diabetes?" I told him that no one had.

At the time I had no idea what wonderful news this would be for me.

The doctor prescribed one of the standard sulfonylurea drugs and told me to get a blood glucose meter. He suggested that I join a local support group, which I did, but it didn't help much, because nobody else seemed serious about dealing with the disease.

No one in my family has ever had diabetes, and I didn't know anything about it. I wasn't as disturbed by my diagnosis as many people seem to be. But it pushed me to change my lifestyle and learning everything I could about the disease.

That's one of the reasons why I got an Internet account the following month. One of the books about the Internet that I bought showed that there was a Usenet newsgroup about diabetes that looked like the place for me to start.

That was easy enough, but I wanted more. One of the so-called articles on that newsgroup mentioned that there was something called the Diabetic mailing list, which I joined in May 1994 when it had about 200 subscribers who sent each other about 30 messages a day. Those numbers are much higher today, but the advice and support that I received were so much more than I got locally that Diabetic soon became what I considered as my on-line home.

Pretty soon I became one of the mailing list's most frequent posters. So it wasn't out of character for me to answer a message that Stephanie posted on the list. "What do you do if the person you're dating has no regard to your health?" Stephanie wrote.

After several other people had responded, I wrote her on October 8, 1994. "I agree with all the other comments," I wrote. "Dump the jerk. But unlike the others, I have a positive suggestion to make. Me. I am available for dating! Like you, I am Type II, controlled by diet and exercise. Since you have to travel to see that jerk, you won't mind coming to the central coast of California to see me (sorry, but I can't come to visit you; I like it here too much). If you could put up with that guy, you could certainly put up with me, even though I am somewhat less than perfect. I could be a little old for you, but then you could just say that I am a mature 59...."

Stephanie answered, saying, "I have read many of your postings. Tell me more about yourself."

That was all the invitation I needed for me to go on and on about myself in my response to Stephanie and to everyone else on the Diabetic list. I told them everything that was important about my personality, including my love of spicy food.

It turned out that Stephanie wasn't any more interested in a relationship with me than I actually was with her. But the next evening, the most important e-mail I ever received showed up on my computer. It was a message from another member of the Diabetic mailing list who had read the exchange between Stephanie and me.

"Since Diabetic is getting a bit romantic, I am single, 57 and live on the California coast. However, my dislike of spicy food would undoubtedly be an un-ignorable character defect!" The message was signed "Catherine Nord, type 2, three years."

That was all, but it was enough. The following day I responded privately to Catherine. I told her that I accepted her dislike of spicy food and asked where she lived.

It turned out that Catherine lived in Santa Cruz, California, 300 miles north of my home in Carpinteria. After several more private e-mail messages and then even more telephone calls, we arranged to meet for our first date about half way between our homes.

We met, as they say on the Internet IRL (in real life), for the first time on October 29, 1994, at a romantic restaurant overlooking a creek in the city of San Luis Obispo. During the next year we drove thousands of miles for more and more serious dates until we were married exactly one year to the day after meeting IRL. Since Catherine owned her own home in Santa Cruz near where she taught school, I moved there, where we have been living happily ever after. 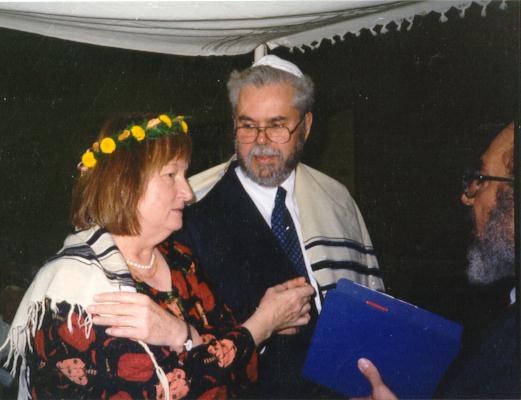 Once I got my diabetes under control, my doctor was glad to let me stop taking any drugs to control my disease. My most recent Hemoglobin A1c test showed that it's down to a normal 6.0.

I weigh less, exercise more, and feel better than before my doctor gave me the diagnosis that I had diabetes. The Internet helped me find our more about diabetes than I ever imagined was available.

I had hoped that the Internet would give me that information and support. What I never imagined when I sent that fateful tongue-in-cheek message to Stephanie was that it would lead to my marrying Catherine.

That's why I say that the diagnosis that I have diabetes was wonderful news. There's no question in my mind that the diagnosis, along with a little help from an Internet mailing list, led me to Catherine, which is certainly the best thing that ever happened to me.

This article appeared originally in Two Types magazine, July 1997, pp. 61, 63, which is no longer published.