When you have diabetes, you don’t have enough functioning beta cells. People with Type 1 diabetes have quickly lost almost all of these cells that make insulin, and if you have Type 2, you will typically experience a progressive decline in the number and size of your beta cells.

One type of diabetes drugs has been shown in animal studies to stop this progression. It may do this for humans too, but because the drug is so new researchers don’t know yet if it will work the same way for us.

The technical name for this drug class is a mouthful:  glucagon-like peptide-1 receptor agonists. Researchers often shorten it to GLP-1 receptor agonist or even to GLP-1. The newest brand of these drugs is Trulicity. The others that are available in the United States are Tanzeum, Victoza, Bydureon, and Byetta, which was the first. 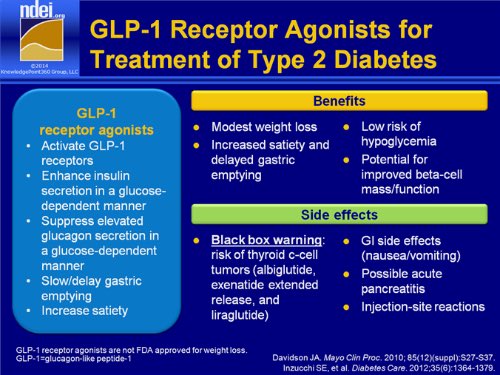 These drugs to help us manage Type 2 diabetes have only been available for just over 10 years. While they haven’t been approved for people with Type 1, some of these people apparently benefit from using them too, when their doctors prescribe them off-label.

As soon as my health insurance began to cover the first of these drugs in early 2006, I took it to manage my blood glucose and my weight at the same time. This worked so well that I stopped taking it after less than two years because I no longer needed any drug for either condition.

Ever since then, I’ve been able to keep my A1C level down to about 5.5 or less without drugs, what the American Diabetes Association calls “complete remission.” I have wondered how I could be so lucky, when the experts keep telling us that diabetes keeps getting progressively worse.

The answer may be in the studies that show that this drug can maintain the balance between the birth of new beta cells and the death of old ones from apoptosis, which is the normal and controlled dying off old cells. Accelerated apoptosis is the main reason why Type 2 diabetes tends to get progressively worse.

A recent study in The Journal of Pathology reviewed many animal studies, mostly on rodents, showing that GLP-1 drugs increase the number and size of beta cells. Human cells studied in vitro, like those in a test tube, largely support the findings of animal studies. But because there are important differences between rodents and humans, in the rates and capacity for islet cell turnover and growth, “it is not a reliable assumption to extend the findings from animal studies to human studies,” writes Alan Garber, MD, in “Incretin Effects on β-Cell Function, Replication, and Mass.” He is professor of medicine at Baylor University and the chancellor and president elect of the American College of Endocrinology.

We don’t know for sure yet if taking one of these GLP-1 drugs will preserve our beta cell function. Only when researchers do long-term studies can we be certain that they will maintain the balance between the birth and death of beta for a long time, Dr. Garber writes.

But the research to date makes it seem likely that these drugs may well be able to help at least some of us do even more than reduce our blood glucose level and our weight. It’s a good bet that GLP-1 can also stop the typical progression of diabetes from bad to worse by helping us to maintain our beta cell mass.