When I joined a meeting of Food Addicts in Recovery Anonymous recently I introduced myself by saying, “My name is David and I am a food  addict.”

I’m a food addict and I am in recovery, but I’m not anonymous. I lost half of my body weight and have kept it off. It has been a struggle and continues to be one that almost all of us with type 2 diabetes share. Until I went to the annual convention of the American Diabetes Association in June, I didn’t know about Food Addicts in Recovery Anonymous. Had I found it soon my journey to a normal weight would have been much easier. 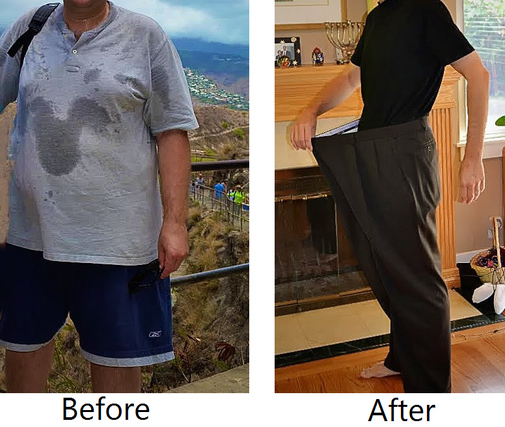 These are before and after pictures of someone I am calling “Eric, because in public members of FA don’t use their full names or reveal their faces.

He had pre-diabetes before he went on the program. He is 6’3″ and in 2012 weighed 343 pounds, making him “morbidly obese,” according to the National Heart, Lung, and Blood Institute. But in less than a year in FA he lost 160 pounds, bringing his body mass index, or BMI, down to normal.

Eric tells me that also was able to get off medications for high blood pressure and acid reflux. And like me, he no longer needs a CPAP machine for sleep apnea.

Unlike Eric, most members of FA are women; 88 percent of those who responded to the survey said they were female. My guess is that this is because women are more willing than men to admit that the can’t do it themselves and that they will be more successful with help from others.

People in the program commit to attending three meetings each week. Each morning FA members talk with their sponsor to say what they will eat that day.

My Visit to Food Addicts in Recovery Anonymous

Eric isn’t a member of the FA group that I went to recently where I was the only man among five women. Catherine facilitated the meeting and told her story.

“Food was my go-to when other things failed,” she said. But now she has more than one year of abstinence. Catherine is now focusing on being honest with herself. “Honesty is the foundation that gives me hope. I know that my addictive nature isn’t going to go away. But since November I’ve weighed the same and don’t worry about my body now.”

Leah also mentioned honesty in the FA meeting I attended. “I am honest with people now,” she said. “Honest is the foundation of the program.”

“I hated the question, but it started me in the right direction,” Leah told us.

Maggie is 62 and once weighed 325 pounds; she’s now at to 170. “Food was my answer for everything,” she told us at the meeting. “But I know now that there are a lot of things that food can’t do. Every day I get better.”

How to Join FA

Anyone who wants to stop abusing herself or himself with food is welcomed to come to an FA meeting, but only members of the fellowship with 90 days or more of continuous abstinence in FA are invited to share.

This nationwide organization also has programs and meetings in seven other countries. In the U.S. its members meet in hundreds of cities shown here.

FA is a 12-step program in the tradition of Alcoholics Anonymous. Former members of Overeaters Anonymous established FA as a separate organization in 1998 united by focusing on addiction rather that on compulsion, eating disorders, or symptoms.

A precise definition of abstinence unites FA members. Abstinence is a discipline that members follow to get release from their food cravings, from obsessing over it, or from abusing themselves. FA defines abstinence as eating weighed and measured meals with nothing between meals; no flour, no sugar, and the avoidance of any foods that lead to binging.

Like these people, hundreds of members have found continuous, sustained freedom from obsession, compulsion, and all other symptoms of food addiction. More than one-third of the people who answered the most recent FA survey said they were abstinent for more than a year. It can work for you too when you give it a chance.

A New Way for People with Diabetes to Lose Weight

Another Nail in the SAD Coffin