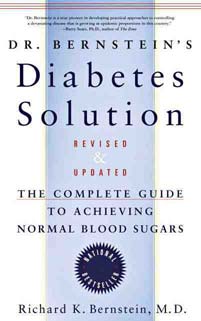 Finally, the revised edition of the low-carb bible for people with diabetes

Dr. Richard K. Bernstein sets such a high standard that even to his friends like Charlie Suther he sometimes appears inflexible and a zealot. His low-carb diet is so low that it’s a wonder he has been able to stick to it. He prescribes 6 grams of carbohydrates for breakfast and 12 each for lunch and dinner. In addition, he allows 12 grams per snack, but since the snack and the following meal must be on an empty stomach — 4 hours apart — this diet allow no more than a grand total of 42 grams carbohydrate each day.

Dr. Bernstein is a remarkable man who developed type 1 diabetes in 1946 at the age of 12. He suffered from years of chronic fatigue and debilitating complications.

Educated as an engineer, in 1970 he was the first diabetes patient ever to use a blood glucose meter, as I recounted in the fascinating story at http://www.mendosa.com/memories.htm.

“One of the main reasons why I started all the blood sugar measurements was all the hypoglycemia,” he told me years ago. “My family was mad at me. I made them miserable, terrified.”

Doctors told him that it was impossible for people to normalize their blood sugars. With constant testing, however, within a year he refined his insulin dosage and diet so well that he has been able to maintain essentially normal blood sugars for the past three decades.

Dr. Bernstein tried in vain to spread the word. But without professional credentials, he couldn’t get published.

He demonstrated his uncommon persistence in 1979 at the age of 45 when he entered the Albert Einstein College of Medicine, graduating in 1982. He started his endocrinology practice—limited to the treatment of diabetes and obesity—the next year.

Dr. Bernstein’s demanding diet undoubtedly works for him and for his patients. He shared his program in a May 1997 hardback book, Dr. Bernstein’s Diabetes Solution: A Complete Guide to Achieving Normal Blood Sugars (Little, Brown, 391 pp., $27.95). Now, six years later the revised and updated edition, now titled Dr. Bernstein’s Diabetes Solution: The Complete Guide to Achieving Normal Blood Sugars will appear this month. Enlarged to 512 pages, in part due to the addition of 40 new recipes, the new hardback edition lists for the same $27.95 price as the first.

“To my knowledge, a paperback version is not in the works,” Theresa Dionisio, Senior Manager, Online Marketing and eBooks, AOL Time Warner Book Group (which owns Little, Brown and almost everything else) wrote me recently. “However, this can change.”

There was a paperback version of the first edition, and it was sold for $8 only through Bayer Healthcare. A customer service representative at Bayer’s hotline, (877) 716-1733, told me that he doesn’t think that the offer will apply to the new edition, but they still do have the first edition in stock.

It may sound like Dr. Bernstein is one of my heroes. He is, even if I don’t rigorously follow his low-carb diet. I have been fortunate enough to maintain normal A1c levels without going that far.

However, for thousands of people this book is the nearest there is to being a bible of righteous eating. In my view, his program is certainly sufficient, but I don’t believe that it is necessary for everyone.

Dr. Bernstein is a maverick. My evaluation is certainly much more positive than that of the American Diabetes Association. For that organization, Dr. Bernstein has been practically an outcast for the bulk of his career.

Too bad, because his main strategy, which he calls the “Laws of Small Numbers” is eminently sensible. When you change your diet or insulin regime in small steps, you just can’t go very wrong.

Perhaps the most intriguing aspect of the new edition is Dr. Bernstein’s weight loss program, which he says has never before been published. It consists of low doses of naltrexone, which appears to raise endorphin levels in the brain. Narcotics addicts use large does to kick their habit. He says that it has worked in 73 percent of the patients who have tried it, and he has a patent pending. For more, see pages 197-198.

Also newly added to this edition is a short appendix on the glycemic index. There are three things about it that he doesn’t like:

Since I am in close contact with Professor Jennie Brand-Miller, the world’s leading authority on the glycemic index, I asked her what she thought about Dr. Bernstein’s reservations.

Her reply addressed each of his point:

Still, I am not optimistic that Dr. Bernstein will change his mind on the glycemic index. “Right or wrong, when he makes an evaluation of an instrument or system he sticks by it no matter what,” his friend Charlie Suther told me years ago. He was referring to the recommendation that Dr. Bernstein made that we should use the Bayer Glucometer Elite meter, because he thinks that it is the most accurate. Now known as the Ascentia Elite meter, that is the meter he still recommends, according to a representative in his office a few days ago. In fact, Charlie Suther says, “They are all about the same.”

Dr. Bernstein is so persistent and focused on his health that he might seem unreal. If that is the case, reflect on these words from his book. “My mouth waters whenever I pass a bakery shop and sniff the aroma of fresh bread, but I am also grateful simply to be alive and sniffing.”