Medtronic MiniMed is the first company to link an insulin pump and a continuous glucose monitor. Approved by the Food and Drug Administration in April, the pump part of the combination is already available. The company expects the monitor part to be available by the end of this month. 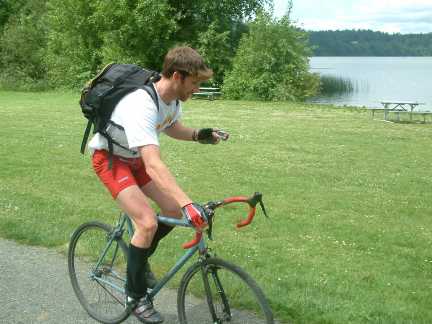 Chris Jarvis and His MiniMed

But one lucky young man has used both the pump and the continuous monitor since last summer. Chris Jarvis lucked out because he lives in Canada, where his doctor got it released to him in early September.

While Chris has had diabetes since 1994 when he was 14, he’s lucky because he has more experience than almost anyone in using the new combination pump and monitor to help him avoid highs and lows. “The big deal for me is not having the fluctuations while I am training,” Chris told me recently. He is training with the Canadian National Rowing team, which intends to participate in the 2008 Olympic Games in Beijing. He competed in the 2004 Olympics in Athens.

“I used to fluctuate quickly up to 500 and 600 without realizing what was happening,” he continued. “And anything below 100 would put me in a big panic. I got so frustrated with these highs and lows that I got turned off on testing, because I didn’t understand what I was doing wrong. Now, with all the information the monitor gives me, I know how to make improvements and can relax.”

The system’s alarms warn of lows and highs. Chris sets his low alarm at 80 and his high alarm at 180.

Trend arrows point up or down to show the direction and rate of change in glucose. Trend graphs show the effect of meals, exercise, insulin, and medication on blood glucose control.

“My continuous monitor had an advantage over the Guardian RT, because it has graphs, which give me an easy visual picture of what is going on in the last three hours,” Chris told me. “The 24-hour graph also tells me when my highs are happening, and I can see what went on when I’m asleep.”

Chris says that in the first few months after getting this combination he had to figure out how to use it. “But since then I have learned so much about my diabetes and how to react to different situations. It’s all about problem solving in real time.”

Sidebar:
It’s An Open Loop
The MiniMed Paradigm REAL-Time that Chris Jarvis uses is an open-loop system. It’s not a closed-loop system or an artificial pancreas, which would give him automatic feedback and inject just the right amount of insulin at precisely the right time for him to control his blood glucose level. Instead, Chris decides that for himself based on the monitor reading and trend.

A closed-loop system will have three parts. Pumps to delivery the insulin and continuous blood glucose monitors are proven technologies. The third part is the algorithm  —  computer software  —  connecting the pump and the monitor. This part is the major question mark on the path to a closed-loop system.