The Story of my Younger Years

In one sense—geographically—my life has come almost full circle. My parents were living in Ventura, California, when I was born in Santa Monica on August 5, 1935. Ventura was my home for the first year of my life and is just 15 miles from where I lived in Carpinteria, when I wrote this.

As a third-generation Californian, I grew up in a very different state than the California of today. Ventura was a small town and so too was Upland, where I spent my next eight years, when my parents moved there so my father, Alex Mendosa, could take a job teaching business at Chaffee College. My mother, Eva Ash Mendosa, had graduated from Northwestern University and the Sorbonne with a degree in French and had taught high school, but after her marriage was a homemaker, as women were in those days. Another change is that in both towns we were surrounded by orange groves, which have now almost disappeared. 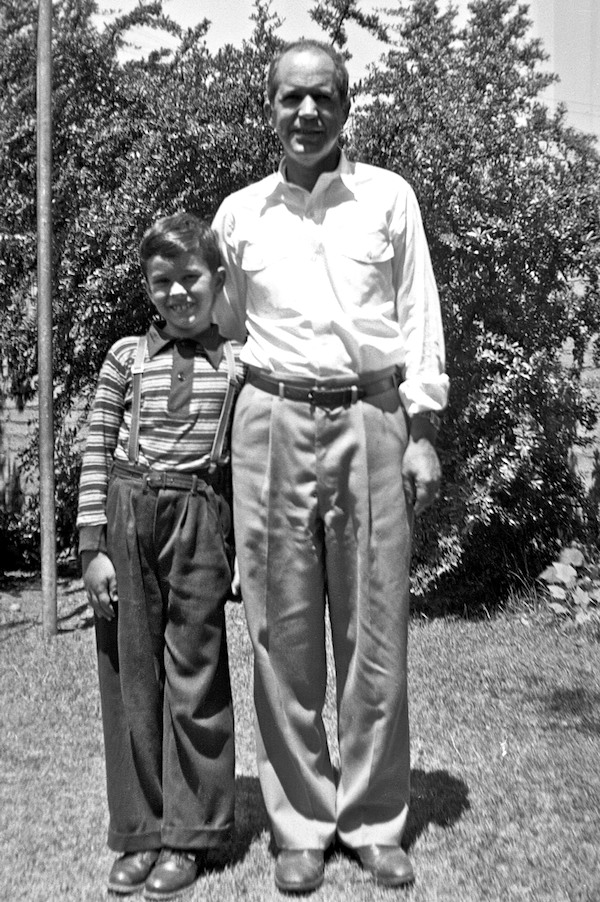 Standing by My Daddy in Upland, California, about 1942

The most important thing about those years was that I was a sick and scrawny child. When I was three, I became severely asthmatic. Perhaps not coincidentally that was when my only sibling, Liz, was born. She has always been a wonderful sister—in our family her role was that of the good child, while I was the wild one—but perhaps I missed the exclusive attention that my parents had lavished on me before she came into our lives. Liz is so different from me that she has lived all her life within 80 miles of where she was born in Upland. She is also different from me in that she remains married to the same person—George Klotz—whom she married in 1955 when she was just 16. Also unlike me, Liz is a parent, having raised three lovely daughters, Kathy, Linda, and Julie, who among them have given her nine grandchildren.

At any rate, my asthma was suddenly and almost miraculously cured the day my family moved up into the San Gabriel mountains to a tiny community then called Camp Baldy (now Mt. Baldy). During three years there I became a "mountain boy," attending a one-room schoolhouse where students from all of the all eight grades learned together. I loved the chance to listen in on the lessons of the older students.

We spent one more year in the mountains when we moved to the community of Crestline near Lake Gregory. Then my family moved to Banning in the San Gorgonio Pass at the edge of the Colorado Desert. I attended the six years of junior high school and high school there. The most significant event there was the first of my many spiritual conversions. I had been raised a Presbyterian, but in high school I became a member of the Church of Jesus Christ of Latter-day Saints (the Mormon church), impressed by the sincerity and humbleness of its adherents. I reformed my wicked ways (at least I stopped smoking). I considered myself a Mormon from about the ages of 16 to 20. I went to Brigham Young University in Provo, Utah, for my freshman year of college. I majored in journalism and became an editor of the student newspaper.

After that year I became a full time sports writer for the Riverside Press-Enterprise, which is now the eighth largest newspaper in California. At the same time I was also enrolled at the University of California, Riverside. I was 19. But after less than one year at the Press-Enterprise and one semester at UCR, I enlisted in the Army on January 26, 1955. The G.I. Bill was due to expire just five days later. The Army also offered me the opportunity to go to Germany. And I would be free of my parents' purse strings. In the Army I did the work I wanted to—public relations—and published my first magazine article (a history of my division for War Story magazine). 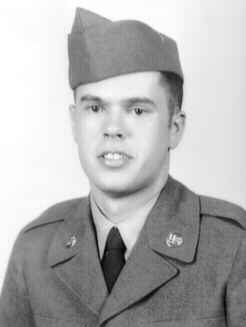 I wasn't crazy about the Army, but I loved Germany. I became impatient for a discharge and saw an opportunity for get out early in order to attend the University of Würzburg, in the city, where I had been stationed. The fact that my girlfriend, Doris Kurscheid, was there was another incentive to remain in Germany. I stayed there for one of the happiest years of my life, in large part because I was away from the cultural restrictions of my own society and the fact that I didn't understand the German cultural limitations well enough to feel restricted by them. A lot of great Bavarian beer and long evenings in the beer halls also contributed to my happiness. I lived well on the G.I. Bill by the German standards of the day and got a part time job as a reporter for a newspaper called The Overseas Weekly, published in Frankfurt for expatriate Americans.

I got more and more serious about Doris, but she wouldn't marry me unless I became a Catholic like her. So I took instructions in the church, and for the second time in my life became a believer. Two years later, back in California, we were married. That marriage lasted an unlucky 13 years.

Still planning to be a newspaper reporter, I returned to the University of California, where I was graduated with honors and was offered an attractive three-year scholarship to The Claremont Graduate University to continue my study of political science, which in fact I had begun only because it was supposed to give a reporter a broad background. I hated the graduate school, the discipline of political science, and many of the other graduate students for their coldness and phony intellectualism. In rather blind despair I took the government's Federal Service Entrance Examination and the Management Intern examination, passed, finished my M.A. program, and went to Washington.

Among several job offers I was excited by the only one that offered program rather than administrative responsibility. That was to be Assistant Sudan Desk Officer with the International Cooperation Administration, which soon became the Agency for International Development (AID) in the U.S. Department of State. But within six months on that job, my boss, who was a very demanding woman executive, had beaten me down so much that I almost believed—but told no one—that I was a failure at that sort of work. But I sought out and obtained another assignment, this time as Assistant Somali Republic Desk Officer, under a succession of superiors, where I was able to build up some of my shaken self-confidence. 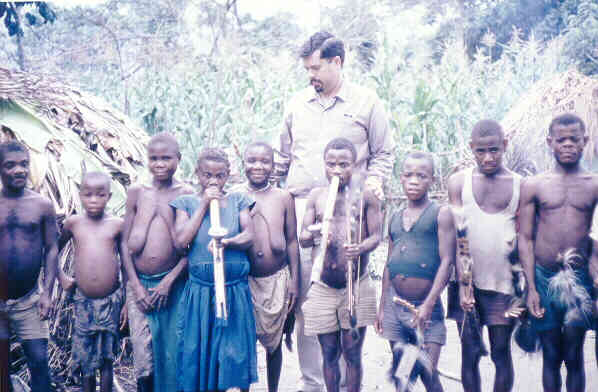 Among the Pygmies
In July 1967 I safaried to the Ruwenzori Mountains on the border between Uganda and the Congo, where I came across this group of Pygmies near the settlement of Bundibugyo. I'm the tall one.

With AID I worked mostly with Africa, serving in East Africa (Kenya) for three years and in Southern Africa (Malawi) for a year. In the latter assignment I was in charge of the AID program, a position far above my rank and one that carried considerable prerequisites. It was extremely bad personnel placement from any standpoint, since it was inevitable that my next position would be a step down and because the assignment was a wrapping-up operation, which was more suitable as a reward for long and faithful service than for a young man like I was at the time. 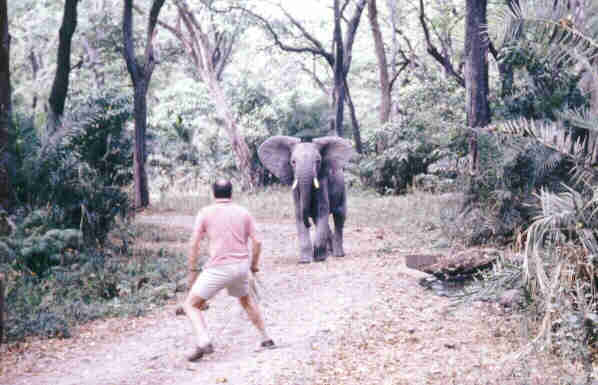 Igor and the Elephant
When I went to Tanzania's Manyara National Park in 1968 with my best friend Igor Lupekine, we found the road blocked by this elephant. So Igor got out the the car to shoo the elephant away. Strangely, it worked. Igor was a brilliant man who not only understood elephants but was also professor of geology at University College, Nairobi, and a truly international man. Born in Egypt of Russian parents, Igor got his university education in England, taught for most of his life in Africa, and retired to Andorra.

When I was assigned to head the AID program in Malawi, I made a point to get to know the regular people of the country as well as government officials. That's one reason why I travelled extensively. By the time my tour ended I had visited all but one place in the country with a population of more than 250 people. Many of these villages were so isolated that it was impossible to reach them by road. These villages were on the 365-mile-long Lake Malawi, the world's ninth largest lake. Since no ship stopped at the villages and the only way to reach them was by ship, I chartered a ship and took several weeks to travel from one end of the lake to the other. Along the way I visited dozens of villages, some on isolated islands in the lake. I took a Peace Corps volunteer along with me as a translator and to emphasize the Peace Corps support that the villagers had received or could receive in building schools, health clinics, and roads. 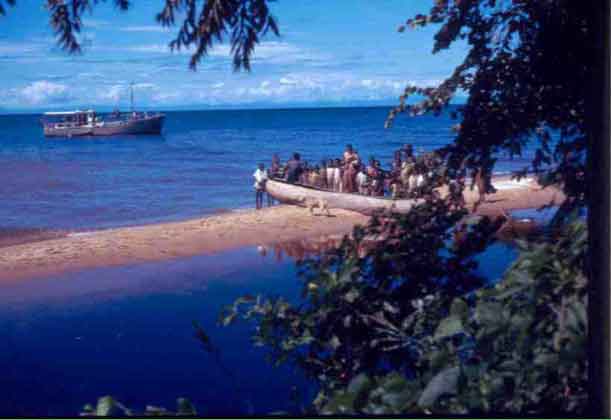 The Welcoming Committee
This is the ship that I chartered to visit isolated villages along Lake Malawi. The village just inland from this lagoon is called Sanga.

Even after devoting 15 years—half a normal career—to work as a foreign aid official, I still had not developed a full-fledged theory of what economic assistance to third-world countries should be. Yet, upon recent reflection, I realize that the positions on the issues that I consistently took—and still believe to be correct—were all of a piece, and that piece was at the liberal end of the spectrum. And this was within an endeavor that is inherently liberal in itself. The positions that I advocated were often seen as too liberal or "soft" by my associates and superiors.

Operations Officer, USAID Malawi
In 1968 I went to Zomba, Malawi, Southern Africa, as A.I.D. Affairs Officer running the United States Agency for International Development program. In 1969 I became the Operations Officer heading USAID in the American Embassy in Blantyre, Malawi. This photo with me on the right is from the January 12, 1969, issue of Malawi Calling, the official program guide of the Malawi Broadcasting Corporation.

I find now that I consistently believed in six principles of economic development to which I still hold fast:

In retrospect, I remain committed to these principles. I would perhaps give more emphasis to education today, although education has always been a high priority of the U.S. foreign aid effort anyway. I would also have focused more on what development does to the environment had I known then what I know today. But basically I look back at my tenure in foreign aid with few regrets and even fewer regrets that I am no longer a public servant.

Go to The Story of My Radical Years