The Story of My Radical Years

The year 1969 was a turning point in my life. I came back from four years in Africa, where I administered America's foreign aid programs in our embassies in Kenya and Malawi. While I was overseas I felt constrained from speaking out against our policies in Vietnam.

But once I was back in Washington, in my own country, I could speak out against the actions of my government without appearing to attack my country. I was working as the Liberian Desk Officer in the Africa Bureau of the Agency for International Development and my office was in the State Department Building. At the same time I joined a small group called "Federal Employees for Peace" and I distributed leaflets at the doors of the building, took part in sit-ins on the Capitol steps, marched with thousands of others, and sold tickets for an inspiring speech by Daniel Ellsberg to us dissidents.

The year 1969 was such a turning point for me because my pent-up rage at what we were doing in Vietnam was finally able to come out. But before that I was a little different from mainstream America. While I was still in college I helped found a university chapter of the NAACP and later I joined the civil rights movement in a marginal capacity, although my wife Doris spent four years at Howard University, the mostly black college in Washington, at my urging.

When Doris and I came back to Washington in 1969 several friends of ours returned from Malawi at the same time. Through those friends I got into an encounter group in early 1971, where I became aware of my feelings for the first time. It had one major direct consequence in that it made me realize that I didn't want to live with Doris any more and gave me the strength to leave. Also through the encounter group, which was a part of the Paint Branch Unitarian Universalist Church in suburban Maryland, I joined that church, my third religious conversion. 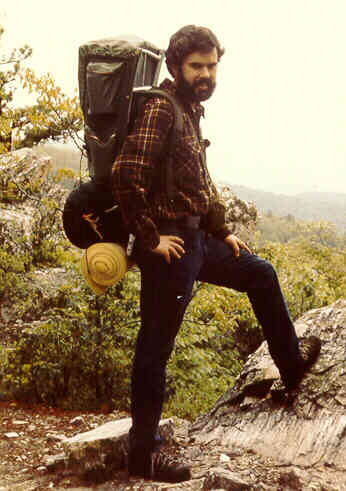 From encounter groups I drifted into psychoanalysis with Arden (Denny) Flint, M.D., a very far out guy who was involved with a spiritual group called Arica. My best friend, Murray Mould, was also getting involved with Arica at that time and so was a girlfriend, Dotty Kessler. So it was inevitable that I went to some of their functions. Except I thought it was just another sort of encounter group—the spiritual aspects were not well publicized then. I gradually got more and more into the Arica lifestyle, so much so that I spent four years or so living in what you might call an ashram or you might call a commune—both are a fair description.

In fact, before I joined the Arica community, I became deeply involved with the communal movement, which I saw as the one positive aspect of the counter-culture. I started by taking classes at two of the so-called "free universities" in the Washington area. A fellow who called himself G Edwards led the first of these classes. In addition to being a vice-president of the University of Maryland, G was a leader of the World Future Society who, like me, was just becoming involved with communal living. During much of 1971, G, my then-wife Doris, and I studied together and planned what may have been the first conference on urban communes. The conference, for which we got facilities at George Washington University, actually came off in December 1971, just after Doris and I split up. A great success, the conference attracted almost 1,000 people who came to hear speakers and participate in two days of discussion groups.

During a meal break at the the conference Doris introduced me to a young woman named Jill who had a room to rent on the GWU campus that happened to be very close to my office in the New State Building. Jill and I became lovers, and when we lost our apartment, we moved together to the home of Andy Wilson and his wife. They wanted to experiment with communal living. Andy and I had gone to high school together years earlier, but we happened to run into each other at Twin Oaks Community in central Virginia a few months earlier. Andy was at that time also working for AID as an economist dealing with Latin America, but we had never met at work.

About this time I became friends with a young couple, Jesse and John DePasquale. They were helping Judson Jerome to research his book on communes. Jud was a well-known poet and former college professor, who in this counter-culture climate had also been drawn to communes. He and his wife Marty also started a commune called Downhill Farm in southern Pennsylvania, which I visited often. He had a grant to write a book, which eventually became Families of Eden: Communes and the New Anarchism (New York: The Seabury Press, 1974). It is one of the best books about the modern commual movement that I have ever read.

Eventually, in 1973 I made the leap to living in a commune myself. I was one of nine adults and 11 children who legally became "Family Investments Inc.," and bought a large house in University Park, near the University of Maryland. We pooled all of our income; each of us took out a small weekly allowance. I was still working for the government and got a little notority when Washingtonian magazine wrote me up in April 1974 among "some creative types," writing that "he's a foreign service officer and founder of a commune for middle-class executives." I moved in with my girlfriend, Elaine Walker, but we broke up within a couple of months. Nevertheless, both of us stayed in the commune for about a year. I left when something better came along—the much more mellow Arica lifestyle. 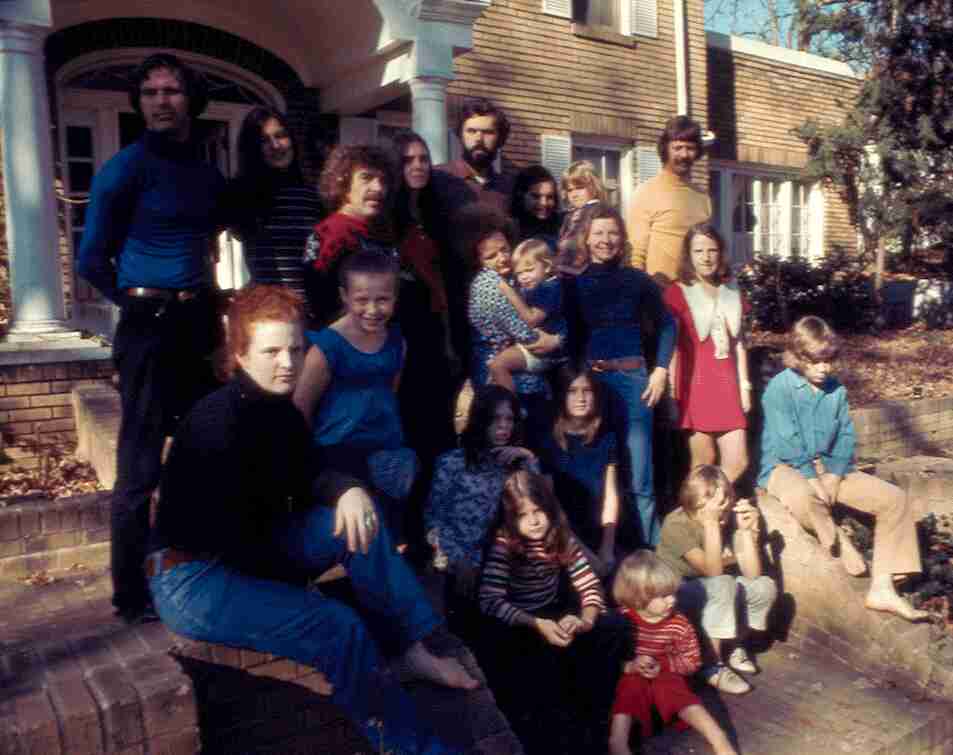 The "Queens Chapel" Commune in Washington, D.C.
The only time that all 20 of us gathered together in one place, Thanksgiving Day, 1973. I'm at the center of the rear row. The commune took its name from its address at 6714 Queens Chapel Road, but officially it was Family Investments Inc.

Since I was living what can fairly be described as an alternative lifestyle, it was altogether appropriate that I should get involved with others of like mind. In 1973 or 1974 I joined a group called Future Families of the World, a national organization of persons interested in alternative lifestyles of all types. Our members included those in open and group marriages, swinging, plus gays, lesbians, and bisexuals. Headquartered in Washington, D.C., the group made me a member of the board of directors and eventually its chairperson.

At the time I was also a nudist. One holiday weekend in 1974 or 1975 my girlfriend and I visited a nudist colony in Pennsylvania along with a group of friends from the State Department. Unfortunately I had just completed some Rolfing sessions—very deep massage—that left me black and blue all around my waist. Most of the other nudists probably assumed that I was some sort of masochist. Otherwise, the trip was quite pleasurable. 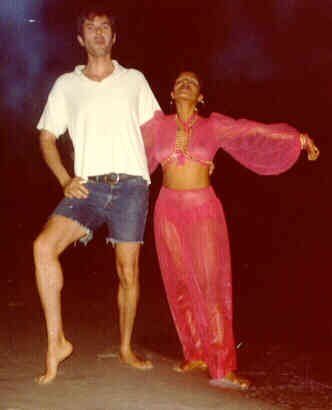 Cavorting on the Beach
Apparently high on something, I'm the hippie on the left. The apparition on the right is Yasmin Jiwa, who had been my secretary in Africa for years before she became my lover in Washington and an official of the World Bank. The photo, near Ocean City, Maryland, is by my then-best friend, AID executive Murray Mould. They were seriously involved with each other the last I saw them—but that's another story.

Looking back now to the year 1976, two events that I witnessed formed a strange juxtaposition of life and death. The first, probably early that year, saw me at Johns Hopkins University Hospital dressed in the traditional medical scrubs. I was there to witness a young lady having an abortion. My work in the Office of Family Planning was what took me there. That this was an unsettling event for me was evidenced by the fact that in a Baltimore motel room the night before my dream of a train coming straight at me drove me up and out of bed in the middle of the night before I woke up. That time too was one of special creativity for me, the only time in my life when I ever painted on canvas. Abstracts with an Arica motif, these paintings remain in my possession.

The second event, much more positive, was the thrill of witnessing the birth of a child. That was a few months later, probably in June 1976. I was living in a beautiful Arica house in Bethesda, Maryland, called the Wyoming Road House, after its location. Two of my friends who lived there with me, Yvonne Reynaldo and Joe Henderson, had come there from Gainesville, Florida, along with their friend Carlos Durana, now a well-known acupuncturist in Washington. Yvonne's and Joe's baby, appropriately named Summer, was born in their room with the help of a midwife as the whole house watched and meditated and chanted. Yvonne had also asked me to photograph and tape record the birth, records that I assume that she or Summer now have.

All this time, of course, I was still a Foreign Service Officer with a top secret security clearance. I finally left the government on July 4, 1976, and a few months later returned to my roots in California. I've never regretted it, even though it meant years of reduced earnings. It gave me the chance to start over in a more normal place. I've never regretted my experimenting in Washington either. I'm especially appreciative of what I got out of my spiritual experience with Arica, even though I don't belong to that community any more nor do I do any of its practices, except for some meditation now and then. 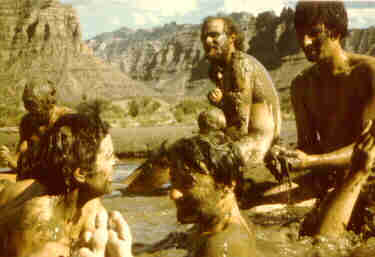 Mudbaths on the Green River in Utah
In 1975 I white-water rafted down the Green River with a group of Aricans. I'm the one at the left foreground, behind some inexplicably clean toes.
That's the briefest possible story of my wilder years. Those who know me now would never guess.

Go to The Story of my Mature Years