The Future of Pumps

Rarely do scientific findings and technological advances that can bring this science into our lives come close together. But that’s the fortunate place where we now find ourselves. Insulin pumps connected to continuous sensors promise to be a big step forward in the control of diabetes. 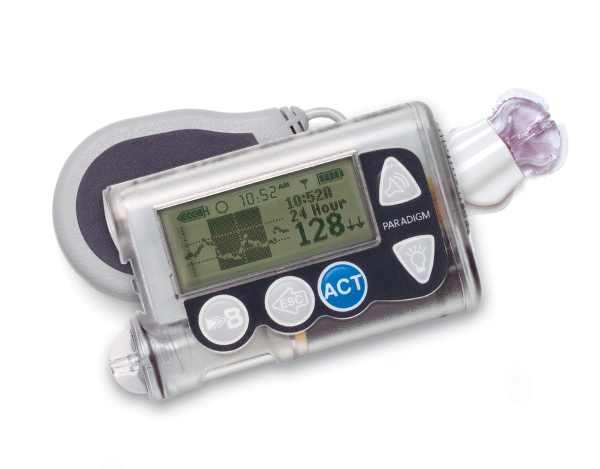 The science is documenting that even good fingerstick test results and great A1C levels aren’t enough to prevent diabetes complications. All this testing can still hide acute glucose swings, which scientists call both glycemic variability and glucose excursions. The trouble is that even an A1C level of below 6 or 7 percent can mask lots of highs and lows.

Growing scientific interest in glycemic variability in the past couple of years has culminated so far in articles published in the April 12 issue of JAMA: The Journal of the American Medical Association. Dr. Louis Monnier and his associates in Montpellier, France, reported a connection between oxidative stress and glycemic variability that is quite separate from A1C levels. Two American doctors, Michael Brownlee and Irl Hirsch, underscored the importance of the Monnier article with an editorial in the same issue of JAMA that highlighted the importance of intensive control.

Nothing tells us our glycemic variability better than continuous sensors. This technology is reaching fruition this year, although the idea of continuous sensors dates to 1962 and the first one appeared in 1999, when the CGMS or Continous Glucose Monitoring System became available.

The CGMS, now marketed by Medtronic Diabetes, shows blood glucose levels ever 5 minutes, but you have to go to your doctor’s office every three days to see the results. In 2002 the GlucoWatch Biographer, manufactured by Cygnus and now sold by Animas Corp., became the first continuous sensor to show real time results. Last September the Guardian RT System  — RT stands for “real time”  —  from Medtronic Diabetes became available in limited release. Then, this March the fourth continuous sensor, the DexCom STS, became available. Abbott Diabetes Care’s FreeStyle Navigator will probably be available before the end of the year.

Each of these continuous sensors will show you when you go too high or too low. But they won’t prevent these glycemic excursions. This takes alarms that warn you of impending excursions and connecting them to insulin pumps. Like continuous sensors, we have had insulin pumps for years. They are small pager-size devices that deliver insulin around the clock. In 1983 the company that became Medtronic Diabetes came out with the first pump. Since then pumps have continuously become smaller and easier to use. While Medtronic Diabetes continues to dominate the pump market with about 70 percent of U.S. sales, four other companies also offer pumps, and more are poised to enter the market.

Animas, Smiths Medical, and Dana Diabecare have also offered pumps for several years. The Food and Drug Administration approved Insulet Corp.’s innovative OmniPod last year, and it is now reaching the market. The OmniPod is the first pump to do away with tubing.

The FDA has also approved Nipro Diabetes Systems’ Amigo pump, which the company expects will be available at the end of this year or early 2007. Roche Diagnostics is still awaiting FDA approval of its Accu-Chek Spirit. And Abbott Diabetes Care is developing the FreeStyle Aviator.

It wasn’t until this April that the FDA approved the first sensor-augmented pump. This pump from Medtronic Diabetes has a mouthful of a name: the MiniMed Paradigm REAL-Time Insulin Pump and Continous Glucose Monitoring System.

“Medtronic getting this approval is huge,” Aaron Kowalski, director of strategic research projects for the Juvenile Diabetes Research Foundation, told me. “The most powerful way of incorporating continuous information into diabetes management is through a pump.”

The Paradigm REAL-Time is the just first of several sensor-augmented pumps. Abbott has already announced plans to integrate the Navigator with its Aviator. Animas and Roche will likely pair its pumps with a continuous sensor that the company has under development or one that it may purchase externally, like the DexCom STS.

Today, only about 300,000 Americans, most of them with type 1 diabetes, use insulin pumps, according to David Kliff, the publisher of “Diabetic Investor” newsletter. Several million more use syringes or pens to inject insulin. In the future the number of pump users  —  including many with type 2 diabetes  —  will grow greatly as they become aware of the benefits of reducing glycemic excursions through continuous sensors integrated with insulin pumps.

David Mendosa is a freelance journalist and consultant specializing in diabetes and lives in Boulder, Colorado. When he was diagnosed with type 2 diabetes in February 1994, he began to write entirely about that condition. His articles and columns have appeared in many of the major diabetes magazines and websites. His own website, David Mendosa’s Diabetes Directory, established in 1995, was one of the first and is now one of the largest with that focus. Every month he also publishes an online newsletter called “Diabetes Update.” Twice weekly he writes for his blog at http://blogs.healthcentral.com/diabetes/david-mendosa. He is a coauthor of What Makes My Blood Glucose Go Up...And Down? (New York: Marlowe & Co., August 2003, and second American edition coming July 10, 2006, and other publishers in the U.K., Australia, and Taiwan).

This article originally appeared in the July 2006 issue of Diabetes Wellness News, pages 5 and 7.