The Next Generation of Continuous Monitors 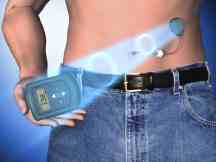 When we think about Medtronic Diabetes, insulin pumps usually come to mind. That makes sense, because MiniMed, which Medtronic bought a few years ago, was the first to market an insulin pump and today dominates the U.S. market with more than a 70 percent share.

Its continuous glucose monitoring business is much less well known, but will potentially help many more people with diabetes. The company was first to offer glucose sensing technology for use by healthcare professionals to continuously monitor glucose levels, the CGMS System Gold, often just referred to as “CGMS.”

Medtronic’s sensor systems monitor glucose readings every five minutes for up to three days, recording as many as 288 fingerstick values. Since CGMS is used as a professional device, you would have to go to a doctor’s office to learn more about your glucose trends.

Through a partnership with Becton Dickinson, Medtronic offered the first meter and pump system to patients. Using wireless communication, the Paradigm Link Blood Glucose Monitor automatically transmits a glucose value to a Paradigm 515 or 715 insulin pump. “Smart pumps” calculate the complex diabetes math for patients, keep track of how much insulin has been used by the body and recommend insulin dosages to patients.

The Guardian RT System displays real-time glucose readings and alerts patients when glucose values become too high or low. The letters ”RT” stand for real time. With real-time glucose readings, patients can intervene earlier to reduce the severity and duration of low or high blood glucose levels. They can also print reports and discuss treatment changes with their doctors.

In September 2005 Medtronic initiated a limited market release in seven cities while it works to create reimbursement for this new product. The Guardian RT system will also be sold in Canada and Europe later this year.

Approval of the Guardian RT System bodes well for the company’s upcoming system that integrates an insulin pump with continuous glucose monitoring. This future “sensor-augmented insulin pump” will be the first step toward creating a closed-loop artificial pancreas. An artificial pancreas is designed to monitor glucose levels and deliver insulin with minimal patient involvement. The Guardian RT moves us much closer to that goal.

Sidebar: The Continuous Advantage
Having real-time glucose readings is like watching a feature film for the first time after a life of seeing still frames. With real-time data, we can learn about the effects of diet and exercise on our blood glucose control. Further, we can take action earlier to reduce the severity and duration of glucose levels that are too high or too low.

Real-time readings come from glucose sensor technology, not meters. A meter takes a snapshot of your blood. It is random, and you can’t be sure when to test. But when you use a continuous glucose monitor, you are testing all the time and get a moving picture that correlates with your life.