The Story of My Mature Years

After I quit my government job in 1976 I retreated completely into the spiritual community, Arica, that I joined in 1973 after an intensive 40-day training. How I did that training was an interesting story in itself since I was working full-time for the government at the time. My psychiatrist, himself an Arican, prescribed it for me so I was able to use accrued sick leave.

On the same day the country celebrated the bicentennial, I celebrated my freedom from working for the same government agency for 15 years. I took a year off and did some intensive meditation with Arica.

I went in so deep into the Arica community that I cut myself off from the real world. That's why I called it an ashram in The Story of My Radical Years. It was certainly a tight community. We lived in a dozen or so "Arica houses" in the Washington, D.C., area, and other Arica groups were in most of the big cities around the country. The largest group and the headquarters of the organization was on 57th Street in New York. The founder and leader of the organization, a Bolivian named Oscar Ichazo, lived on 62d or 63d Street. I took the "Advanced Training" for Arica teachers in New York in 1974 and fell in love with an Arican named Cameo Johnson, who also lived on the Upper East Side. I flew up to spend many weekends with her in the apartment she shared with four or five other Aricans. Her apartment was on the 22nd floor with a wonderful view of the city. A few months later she moved to Washington, and together we moved into a beautiful 6 or 7 bedroom house in Bethesda, Maryland, a block from the Potomac River and about 10 miles from Washington. It was in this beautiful, peaceful place that I so deeply retreated from the world. Retreated so fully, in fact, that I finally had enough of it.

I knew I didn't want to stay in Washington any longer. I was sure only that I didn't want any more of the fast life in the big city. I flirted with the prospect of joining some friends of mine who had moved to Maui to grow sinsemilla. I visited them briefly, but didn't like the vibes. So after returning to Washington I set out for California in a long, unstructured journey by car. It took months as I stopped to go hiking and backpacking wherever I could, especially in the Smokies and in New Mexico and Arizona. I stopped for a few weeks with a girlfriend in Memphis and for a few days with a couple in Dallas. I was headed back to California where I was born and raised. My parents were living about 35 miles east of Los Angeles, and I eventually made it there and made it my headquarters while I could decide where I wanted to live and what I wanted to do.

Finally I drove up the coast and about 100 miles northwest of L.A. I rediscovered Santa Barbara. I had been through it a few times and actually spent the first year of my life just 30 miles south of it in Ventura. I felt that Santa Barbara was the most beautiful small city I had ever seen. The city was completely rebuilt after the 1925 earthquake in a so-called Spanish style with tile roofs, arches, and other Spanish touches. It's right on the ocean with incredibly mild sunny weather. And unlike all the rest of coastal Southern California the air is not polluted by smog nor is the place packed with people. In 1977 I knew I had found my home, and I remained in the Santa Barbara area for 18 years.

Deciding how I wanted to make money was more difficult. I managed to go without working for about two years from the time I quit AID, living off of unemployment compensation and my savings. Unemployment compensation certainly can be a joke. Even though I had quit my job voluntarily and had quite a bit of money saved up I was eligible for it, so of course I took full advantage of it, about a year's worth of benefits at that time. But eventually the day came that I had to stop sunbathing on the beach or hiking in the hills and go to work.

I chose real estate. Unfortunately, I got into it just as prices and interest rates went sky high. I barely made a go of it, except I did fall in love with a wealthy real estate agent named Sarah Boyce and married her.

The marriage was not a happy one. Perhaps because I was so unhappy, it was the period of my life when I was most productive in writing poetry. Many years later Southern Oregon Magazine published two of those poems. There are reproduced on this Web site at http://www.mendosa.com/poems.html.

Sarah and I were married for only a little over a year. She was so much richer than I was she paid me alimony when we split up. 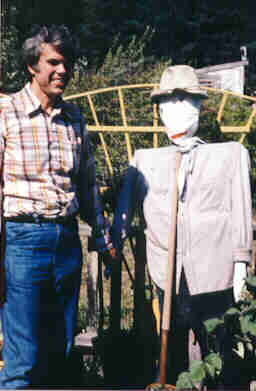 Visiting Uncle Bill's Scarecrow in Mendocino, 1980. I'm the tall one on the left.

That was economically the real low point of my life. I was even reduced to getting food stamps and I really did need them.

Although this was part of my so-called mature years, I again moved into a group home, probably the only non-sectarian one in Santa Barbara in those days. The Mission Ridge House was famous for having successfully fought a Santa Barbara city ordinance that required all occupants of houses like this be members of a family. In City of Santa Barbara v. Beverly Adamson [Rysdale] et al. members of the house argued "that they regard their group as a family and that they seek to share several values of conventionally composed families." The California Supreme Court evenutally upheld our right to live together in this house, which was in a single-family zone where the minimum lot-size is one acre. During the time I was there anywhere from a dozen to 30 adults lived together in this 24-room, 10-bedroom, 6-bathroom house. "The occupants are in their late 20's or early 30's and include a business woman, a graduate biochemistry student, a tractor-business operator, a real estate woman, a lawyer, and others," according to https://www.lexis.com/research/retrieve?_m=6b9e2ddea9cd238b85a415d4423e928d &searchType=&docnum=2&_fmtstr=FULL&_startdoc=1&wchp=dGLzVlz-zSkAz &_md5=f4312e0c40ba2ce665d0bb70fca1666b&focBudTerms=&focBudSel=all. "They are not related by blood, marriage, or adoption....They share expenses, rotate chores, and eat evening meals together....The house has 6,231 square feet of space and is hidden from the street by trees and a fence." One of its greatest features was a hot tub large enough to hold at least a dozen of us at one time. I left only when Beverly sold the house.

Finally I got a job selling women's shoes at a department store in Santa Barbara. I liked the work and was able to do some writing on the side for a business magazine published locally, called Hispanic Business. It was certainly more prestigious but certainly not as well paying. But I got a new department manager at the department store whom I didn't like or respect. That was the kick in the butt I needed to find a better job. Which wasn't hard. I became an outside salesman for the local branch of Bookkeepers Business Service Co. We did the books for small businesses. Half my work was account management and the other half was getting new accounts.

We kept losing a lot of accounts to businesses that were getting a computer. I could see the handwriting on the wall. Finally, I got a new manager whom again I didn't like or respect and again it was enough to drive me to look for another job.

Tandy was recruiting for salesmen in 1982 for its Radio Shack Computer Center in Santa Barbara. I applied and got one of the new jobs. Then, I went into a management training program in 1983 and became manager of the consumer (regular) Radio Shack store in Carpinteria and then in Lompoc and subsequently became computer department manager of the Goleta store. All of these towns are within a few miles of Santa Barbara. I returned to the Santa Barbara computer center in 1986 and became the manager there the next year. However, a few months later Tandy closed the computer center.

While they offered me a job at the Ventura computer center, I didn't want to leave the area, so I struck out on my own as a computer consultant with MS-DOS and Unix systems. One day in 1988 I went to pitch a computer network to the publisher of Hispanic Business, whom I had written for years earlier. He wasn't interested in the Unix network I was offering, but he did want me to start writing for him again.

For about a year I freelanced for Hispanic Business part time while I continued my computer consulting as another part time job. I loved both, but eventually the publisher of Hispanic Business asked me to become a full time editor, a position I kept for four years, until in early 1993 I became a freelance writer again.

A year later in February 1994, with no health insurance I went to the Veterans Affairs Clinic in Santa Barbara. A doctor there told me that I had diabetes. At the time I didn't know anything about the disease. But when I learned that it was a chronic condition that often led to terrible complications, I was scared enough to take much better care of myself—losing weight, eating better, and exercising more.

The diagnosis literally changed my life. In order to learn about diabetes I got an Internet account, where I studied everything I could about it. I was one of the first people to have a Web site dealing with diabetes, when I saw the need to consolidate information about the handful of other Web sites and mailing lists dealing with the disease.

Now, I focus all my writing and consulting on diabetes. Through this long, strange route I've finally found a job that I really like and am good at.

While I love the climate of California, I love Boulder just as much, if not more. I moved there on August 5, 2004, which happens to be my birthday.

I have also changed my name — again. At birth my name was Richard Alexander Mendosa, but until the mid-70's I went by the nickname "Dick," when I changed it to "Rick." That seemed better, but still not quite right. Finally, in 2005 I legally changed my name to David.

I also believe that I have enough experience to articulate my core personal philosophy:

I believe that more than 2000 years ago Rabbi Hillel expressed my spiritual beliefs best when he said, "What is hateful to you, do not unto your neighbor: this is the entire Torah."

In relation to my government, I am a libertarian who would decriminalize victimless crimes, privatize the economy, and generally reduce the role of the state to its irreducible minimum of protecting people and their property.

At the same time I embrace non-violence to actively resist:

My life is coming together. About time.