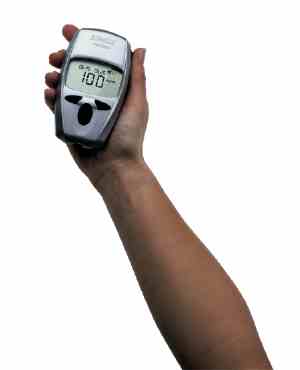 But Americans with diabetes don’t know HemoCue. Yet. That’s about to change.

Thousands of hospitals and clinics in the U.S. use the HemoCue 201 and the Classic to check blood glucose levels of their patients. Researchers, like those I wrote about here last month at the Centers for Disease Control and Prevention (CDC), also generally use them as the standard for judging other meters.

Almost three years ago the company gave me a $600 HemoCue 201, and I wrote about on my website then. At that time they told me that they were coming out with a meter that is just as good, but one that people with diabetes could use and afford.

It’s almost here. By the time this article is published the company will have applied for 510(k) clearance from the Food and Drug Administration, according to Joakim Hagvik, HemoCue’s Global Product Manager for Glucose. He recently visited me at my home in Boulder, Colorado, and left one of the company’s new meters with me.

It’s called the HemoCue Monitor, an unfortunate choice of a plain-Jane name for a most fortunate product. How much better it would have been if they had named it something like the HemoCue Analyzer, because that’s what it is.

The name of this Swedish company translates easily into English  —  hemo stands for blood as in hemoglobin, and cue is short for cuvette. A cuvette is a small, transparent kind of laboratory glassware designed to hold samples. Cuvettes for HemoCue meters serve the same function as the test strips that we have been using.

Like HemoCue’s professional meters, the Monitor uses cuvettes, which can be tricky to use at first. And the sample size it needs  —  a bit less than 4 microliters  —  is larger than the blood drops that most current meters require. The Monitor also takes longer to check your blood, 45 seconds for normal levels and up to a minute or more for high levels.

Joakim told me that he expects the Monitor will cost “in the range of other high-end meters” or about $70. He also expects that HemoCue will price the Monitor’s cuvettes competitively.

The competition for accuracy is about to heat up.

Sidebar: Who Needs This Meter?
The somewhat larger blood drop that the Monitor needs can put off some people. “But there is a tradeoff between sample size and accuracy,” HemoCue’s Joakim Hagvik points out. While not everyone will appreciate the Monitor’s accuracy, it’s important for these five target groups and situations: