Diabetes may be described as a disease of glucose intolerance: high blood glucose is both the characteristic indicator and the cause of complications.

The loss of control of glucose metabolism is what makes a low carbohydrate diet a good therapeutic approach, and it's why I'm astonished that experts encourage people with diabetes to eat carbohydrates and then "cover" them with insulin [1].

I am also surprised to hear negative reactions to carbohydrate restriction from people who have actually seen the deleterious effects of high dietary carbohydrate on people with diabetes. On that note, I offer my personal rebuttal to Hope Warshaw's recent article, "Why You Don't Want to Go Low Carb or Vegan," April/May 2007.

Ms. Warshaw goes on to say, "Second, an adequate amount of carbohydrate is an important component of a healthy eating plan, providing essential fuel, vitamins, minerals, and fiber." I thought fuel is just what we are trying to reduce. And does anybody think that having to take a vitamin supplement is in the same ballpark as injecting insulin? And how healthy is an eating plan that requires medication?

Of course, if you are taking medication, you should reduce carbohydrates only with medical supervision. In most diseases, however, a reduction in medication is considered a sign of improvement. Why would Ms. Warshaw recommend a diet that requires more medication?

It strikes me as odd that what most experts know about metabolism - diabetes is, after all, a metabolic disease - they learned in medical school from somebody like me [2]. The first thing we teach medical students at Downstate Medical Center is that there is no biological requirement for carbohydrate.

It is true that your brain needs glucose, but glucose can be supplied by the process of gluconeogenesis; that is, glucose can be made from other things, notably protein. This is a normal process: when you wake up in the morning, between thirty and seventy percent of your blood glucose comes from gluconeogenesis. There is no requirement for dietary glucose. 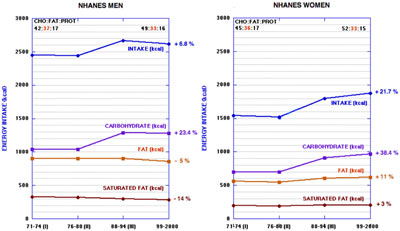 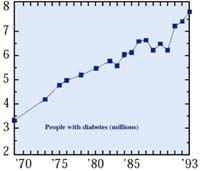 Figure 1B. Incidence of diabetes by year. Data from National Center for Health Statistics.

The second thing we teach medical students is that almost all the increased caloric intake during the ongoing epidemic of obesity and diabetes has been due to an increase in consumption of carbohydrate and a decrease in the consumption of fat (Figures 1A and B). When you look at the foods whose consumption increased during the diabetes epidemic, you see that cereals and grains are among the major ones. (Of course, almost everything increased except red meat and eggs.)

So what is Ms Warshaw's complaint? Well, she points out that "studies that compare low carb diets to conventional diets demonstrate early initial weight loss and improvement in other health parameters, such as blood glucose control ([3]). But studies of low carb diets that last longer than six months do not show significantly more weight loss."

Something's wrong here. Because low carb diets do the same as traditional diets after one year, then you don't want to be on a low carb diet? If they are equal, why doesn't that mean that you don't want to be on a traditional diet? In any case, what is rarely mentioned is that in the study in reference [3], the diets were quite different at six months; as the study proceeded, however, the low carb group added back more carbohydrate. The lesson is clear: the more carbohydrate, the worse the weight control. And the long-term outcomes were not the same. Triglycerides and HDL (healthy cholesterol) were much better on the low carb diet than the low fat diet (Figure 2). 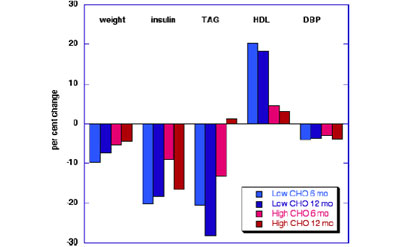 Figure 2. Results at 6 months and 1 year for a multicenter study in which obese men and women were assigned at random to a low-carbohydrate diet or a conventional low-fat diet. Data from reference [3].

Reference [3] is important for showing the general health benefits of low carb diets even when a difference in weight was not maintained, but that study did not include people with diabetes. What happens in those people? Figure 3 shows the results from a controlled ward study of ten diabetic patients before and after three weeks on a strict low-carbohydrate diet [4]. The figure shows the dramatic reduction in insulin fluctuation and, on average, the "return of blood glucose levels to the normal range after meals." Patients were content with the diet, lost weight, had improved lipid profiles, and increased insulin sensitivity by 75 percent.

I don't know of any study on any other diet that shows such good effects on controlling glucose and insulin without increasing drugs. And it's not just the glycemic control. We recently summarized data in the literature showing that all of the features of the so-called metabolic syndrome-high triglycerides, low HDL, hypertension and obesity-are exactly the features that are improved by low carbohydrate diets [5]. If we had been describing a drug, everybody would have rushed out to buy stock in our pharmaceutical company. 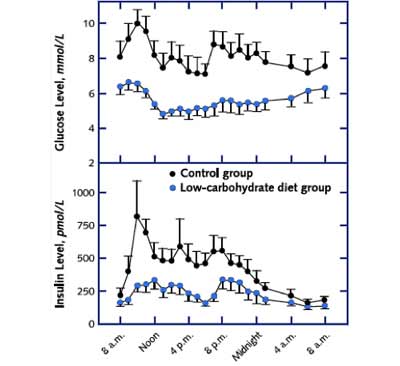 Figure 3. Glucose and insulin levels for patients before or after 3 weeks of a low carbohydrate diet. (To convert glucose to mg/dL, multiply by 18). Data from reference [4].

Ms. Warshaw's complaint is that these studies "show that many study subjects drop out of the study and are unable to stick with the diet." She does not mention that the drop-out rate from the low fat diet was the same as from the low carb diet; that's generally true of the many low carbohydrate studies. In any case, wouldn't it be good for diabetes counselors to encourage compliance rather than to dissuade people from a strategy that actually works for the many people who follow it?

You might want to think twice before you let Ms Warshaw tell you what you don't want to do. "You'll have type 2 diabetes for the rest of your life, and you'll likely struggle with weight management throughout your life as well." She seems to be saying that you may as well go ahead and eat candy because it's all hopeless. There are, however, several sites on the Internet that provide a more hopeful look at managing diabetes with carbohydrate restriction; for example, D-solutions (www.dsolve.com) and Dr. Richard Bernstein's forum (http://www.diabetes-book.com).

I am most concerned that if Ms. Warshaw really had something positive to offer, she wouldn't need to dissuade people from making their personal choice. Candy followed by insulin is not good enough.

Dr. Richard D. Feinman, PhD, authorized me to provide this article here at mendosa.com on December 26, 2008. He is professor of biochemistry at State University of New York Downstate Medical Center, co-editor-in-chief of the journal Nutrition & Metabolism, and director of the Nutrition and Metabolism Society www.nmsociety.org.

David Mendosa is a freelance journalist and consultant specializing in diabetes and lives in Boulder, Colorado. When he was diagnosed with type 2 diabetes in February 1994, he began to write entirely about that condition. His articles and columns have appeared in many of the major diabetes magazines and websites. His own website, David Mendosa’s Diabetes Directory, established in 1995, was one of the first and is now one of the largest with that focus. Every month he also publishes an online newsletter called “Diabetes Update.” Twice weekly he writes for his blog at http://blogs.healthcentral.com/diabetes/david-mendosa. He is the author of Losing Weight with Your Diabetes Medication: How Byetta and Other Drugs Can Help You Lose More Weight than You Ever Thought Possible (New York: Perseus Books, February 2008) and a co-author of What Makes My Blood Glucose Go Up...And Down? (second American edition in July 2006, and other publishers in the U.K., Australia, Italy, and Taiwan).