If we think about counting calories at all, it is usually when we eat. Amazon.com has about 25,000 calorie counting books, and some of them, like Corinne Netzer’s bestselling Complete Book of Food Counts are indispensable for determining how many calories we eat. 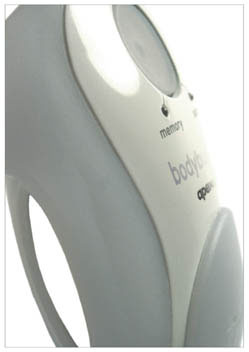 But calories count when we exercise too. Walking, running, swimming, cycling, and, yes, working around the house or garden burn calories. Even when we are resting on the sofa, we burn a few calories.

While only a handful of the calorie counting books even consider exercise, we now have a wealth of new devices to chose from that will help us figure out if we are burning enough calories to meet our weight goals, whether they are to lose weight or to avoid gaining. You can even get gadgets that help you count the calories you burn as well as those you eat.

In the past few years an explosion of devices that count the calories you burn have hit the market. We now have so many options to help us control our weight that a revolution is brewing. You might call it electronically assisted weight loss.

It seems that calorie counters are nowadays being built into every sort of exercise gadget. The least expensive ones come with several brands of pedometers, which count the steps you take and calculate how many calories you burn. I wrote about pedometers here in January 2004, and since then I’ve seen calorie counting pedometers listed online for as little as $10.

Pedometers are for walking or running. But if skipping rope is your exercise of choice and you live in the U.K., you can even get an electronic skipping rope that includes a calorie counter. I haven’t seen it listed for sale in the U.S. yet.

Maybe you want a calorie counter that will talk to you. For $17 you can buy the “Talking Calorie Counter Pedometer.”

Even some cell phones and digital cameras have calorie counters built into them. While that sounds like convergence run amok, it shows how fashionable these gismos are.

Heart rate monitors that use chest straps to send signals to wrist watches usually include calorie counters. Made by big brands like Nike, Timex, and Polar Electro, these devices generally cost in the neighborhood of $100 to $200. Several of them are waterproof, which is something worth considering if swimming is your exercise.

The most expensive calorie counters come with exercise machines, including treadmills, stair steppers, and exercise bikes. My $1,000 treadmill, for example, says it will count calories, but it is based on the weight of a 150-pound person. What if someone weighs less or more? When I called the manufacturer’s customer service staff, they didn’t know.

You can pay as much as $500 for a gismo that does nothing but count calories. However, this device, the bodybugg from Apex Fitness, stands squarely at the intersection of exercise and diet, which along with medication are the three keys to controlling diabetes.

The bodybugg uses five different types of sensors to determine how many calories you are burning. It claims to be 92 percent accurate. It also calculates the calories you consume based on your food log or on how your weight changes or both.

The bodybugg should be accurate enough for most anyone, but the accuracy of calorie counting pedometers is questionable. “Even if you enter your weight and the length of your stride, they will not provide you with accurate information,’ says Steve Freed, a pharmacist who publishes DiabetesInControl.com.

A customer who bought the least expensive calorie counting pedometer would agree. This customer says online that the unit he bought was indestructible. “I threw it out the window, ran over it with my car, beat it with a hammer, put it down the garbage grinder, and it just will not cease to exist. Sure, it doesn’t work anymore. But it never did!”

Aside from the low-end gismos, however, calorie counters are accurate enough for most people, says Guy Hornsby, an associate professor and director of clinical research. He has type 1 diabetes and is on the board of the Diabetes Exercise and Sports Association. “For more money you usually get more bells and whistles, not more accuracy. If a calorie counter gives you more motivation, it’s great.’

Rick Philbin, another DESA board member who also has type 1 diabetes, says that as devices get more sophisticated, compliance goes down. “Keep it as simple as possible,” says this certified athletic trainer.

“If you are interested in using one of these devices,” says Delaine Wright, “you may benefit from collaboration with a member of your healthcare team, such as a Certified Diabetes Educator, an exercise specialist, or a registered dietitian.” She is a CDE and exercise physiologist at South County Hospital in Wakefield, Rhode Island. “These professionals can assist you in setting attainable goals, while helping you to optimize the use of these devices in your diabetes or weight management program.”

None of the eight experts I interviewed for this article strongly favored or opposed using calorie counters. Most would agree, however, that if using a calorie counter encourages you to get more exercise, it can be a useful tool to help you to take in less energy than you expend. And nobody’s arguing with the fact that to lose weight you have to eat fewer calories than you burn.

David Mendosa is a freelance journalist and consultant specializing in diabetes and lives in Boulder, Colorado. When he was diagnosed with type 2 diabetes in February 1994, he began to write entirely about that condition. His articles and columns have appeared in many of the major diabetes magazines and websites. His own website, David Mendosa’s Diabetes Directory, established in 1995, was one of the first and is now one of the largest with that focus. Every month he also publishes an online newsletter called “Diabetes Update.” He is a co-author of What Makes My Blood Glucose Go Up...And Down? (New York: Marlowe & Co., August 2003).