Roche Diabetes Care this week took a bold and potentially dangerous step into the unknown. This leading manufacturer of blood glucose meters invited 29 of us who write about diabetes to what they called the “Social Media Summit.” During the past 14 years that I have specialized in writing about diabetes no other diabetes company had ever reached out to us.

When my invitation first arrived, I didn’t recognize the term “social media.” I now understand it to mean bloggers and other patient advocates, like me, who write about diabetes.

On Wednesday and Thursday we met with top company executives at Roche’s North American headquarters in Indianapolis, Indiana. Luc Vierstrate, Roche’s Senior Vice President and General Manager of Roche Diabetes Care North America, kicked off the event over dinner Wednesday. Roche executives turned out in force, probably outnumbering those of us who write about diabetes. At dinner I sat between the medical director and the vice president of sales, each of whom have type 1 diabetes.

Dan Kane, vice president of marketing, was the guy whose job it was to handle the sometimes unruly writers all day Thursday. While Dan stayed with us throughout the day, one of the leading diabetes bloggers, AmyTenderich, kept things moving. Roche in fact had reached out initially to Amy, who writes her blog at DiabetesMine, to organize the event and determine who would be invited.

“It felt something like a meeting of the mafia bosses — in a good way,” Amy wrote today. “Meaning all these ‘influencers’ were at last sitting under one roof, heatedly debating the future of our respective/collective turf.”

Surrounded by all these old friends and colleagues, I was quite comfortable, even when, as Amy wrote, the differences of opinion became heated, especially toward the end of the meeting. When it ended, I went up to Dan and said that at the rate the debate was progressing I was sure that he was glad that it ended at that point.

But the meeting probably worked just as well for Roche as for its 29 guests. In Dan’s introduction he recognized that the occasion was something like a 7th grade dance with the boys and girls awkwardly sitting on opposite sides of the room, each unwilling to go first. But by the end of this meeting between company officials and diabetes writers we had bridged that gap.

Each side came to the meeting with a different agenda. Beyond that, each individual had his or her own goals. My main interest was to meet in person all the people whose articles I have been reading for years. While some of them, like Jeff Hitchcock, the president and founder of Children with Diabetes, and Kelly Close, whose site Close Concerns is loaded with valuable diabetes information, are old friends, I especially looked forward to meeting my fellow Health Central writer, Ginger Vieira.

In this photo are Ginger, who leads Health Central’s DiabeTeens area, together with Scott King, one of the diabetes Godfathers. Ginger is also a yoga instructor and a power-lifter. Scott founded Diabetes Interview magazine in 1990, which later morphed into Diabetes Health. In 1995 he published the first article I ever wrote about diabetes. 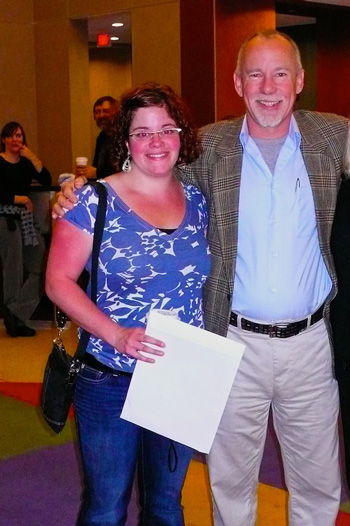 In this mostly youthful group, I stood out as the oldest and also the tallest, as you can see in this group photo: 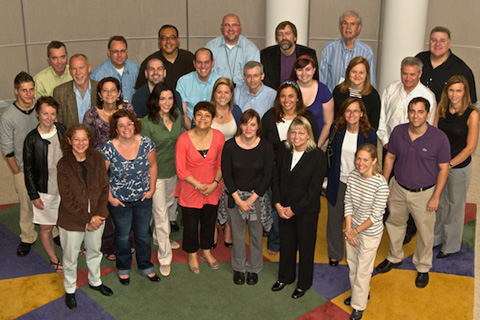 I'm the Tall Guy in the Back Row Second from Right

Considering that 90 to 95 person of people with diabetes have type 2, it might seem strange that all but two of the 29 have type 1. Charlie Cherry, the founder and producer of DiabetesPowerShow (at top right in the photo above), was the only other type 2 except me at the meeting. But relatively few of us type 2s are patient advocates; my good friend Gretchen Becker, who also writes for Health Central, is the biggest exception.

But a huge gap at the meeting was the absence of the two Godmothers, June Bierman and Barbara Toohey. Most of us diabetes old-timers got our first lessons on how to live with diabetes from their books. I had the privilege of working with June and Barbara in 1999 and 2000, but they are now retired.

I’m sure that all 29 of Roche’s invited guests had a wonderful time getting to know each other better — and getting to know Roche for the first time. Few people realize it, because Roche is low-key about it, but they are the world’s biggest meter and strip manufacturer. In the U.S. Roche offers the Aviva and the Compact Plus blood glucose meters.

We weren’t shy about telling Roche executives what we thought they could do better. While we seemed to recognize that Roche is the quality producer in the diabetes meter marketplace, much of our outspoken input focused on the high cost of diabetes, specifically the cost of blood glucose testing.

Roche made the brave first move to the diabetes community as represented by us 29 patient advocates. We responded. Now we are hoping for the dialogue to continue and strengthen.

The Three Ways to Diagnose Diabetes

Testing the Tests of A1C