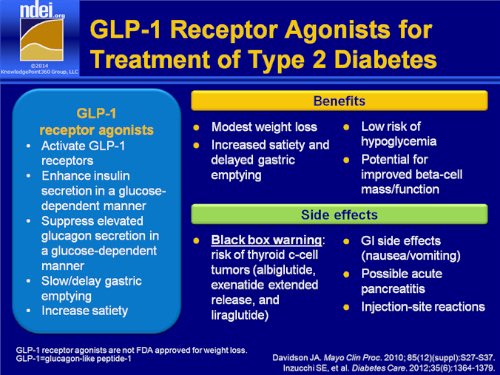 You will probably gain weight when you take most diabetes medicines to help you manage your blood glucose level. This in turn makes your diabetes harder to manage. But one relatively new class of diabetes medicine will often help you to lose weight.

The shining exception to this sad story is a relatively new type or class of drugs that helps those of us who have type 2 diabetes to reduce our blood glucose level and at the same time also helps us to lose weight. These drugs have the technical name “glucagon-like peptide receptor agonists.” Because this is a mouthful, we often call them GLP-1 agonists or incretin mimetics.

How much you lose depends on whether you work with it or against it. When you take one of these new drugs, studies show that you will lose weight. The companies that provide these drugs don’t emphasize the weight loss.

Because I wondered why they didn’t, once when I had the chance to talk privately with a former CEO of one of these companies, I asked her. She told me — not for attribution — that they tried to avoid the topic out of concern that the U.S. Food and Drug Administration might crack down on them for discussing it, because these drugs are approved for diabetes management and not for the much larger population that needs to manage weight.

When I asked my doctor to prescribe one of these new drugs, he told me that the people in the clinical trials didn’t lose as much weight as I needed to lose. For example, the people who took it for a year lost about 8 pounds.

But I knew that the researchers for the clinical trials had told the people taking it to continue eating the way they had always done. I had talked on the phone with an endocrinologist who had encouraged his patients to work with the GLP-1 drug, to accept that they weren’t nearly as hungry any more Consequently they had lost an average of 35 pounds. Because my doctor didn’t give me a prescription for it, I found another doctor.

When I started to take it, I was serious about needing to lose weight because I recognized that this was my last chance. At that time I weighed 312 pounds and had a BMI of 39.5, right on the cusp of being “morbidly obese.” One year and 10 months later, when I weighed 168 pounds for a BMI of 21.3, which is in the low normal range, I didn’t need it any more. I had lost 144 pounds and felt like a new person. I looked like one too.

Most Other Diabetes Drugs Lead to Weight Gain

Almost all of the other drugs that we can take for controlling diabetes make us gain weight. In turn, this makes it harder to control diabetes. Most people with diabetes need to take oral medication or insulin to control it. Only 15 percent of us don’t take either insulin or an oral medication.

Those studies also showed that people taking on the the sulfonylurea medicine also gained weight, although not quite as much as with insulin. The only other diabetes drugs besides those in the GLP-1 class that might lead to a weight loss are metformin and one of the dipeptidyl-peptidase-4 inhibitors, although all of these drugs are usually considered to be weight neutral.

Because most of the diabetes drugs lead to weight gain, for a long time we couldn’t win. This is what scientists call a double bind. We are most fortunate that now we can manage our diabetes at a time when one of the GLP-1 drugs can help us untie that knot.