Omega-3 for Vegetarians with Diabetes

Many of us want to manage our diabetes by following a vegetarian diet. Most vegetarians object to eating meat because of ethical motivations stemming from respect for sentient life or for environmental concerns. These are worthy motivations.

Others are vegetarians because they believe that avoiding meat is healthier. Until now, however, a vegetarian diet is clearly less healthy in at least one crucial respect.

Getting enough heart-healthy and anti-inflammatory omega-3 fatty acids has been essentially impossible without eating fish or supplementing our diet with krill or fish oil. Many of us have the mistaken belief that vegetarian sources of omega-3 from chia or flax seeds will satisfy the requirements of our bodies for this essential nutrient.

But typically only 4 to 8 percent of the type of omega-3 fat found in these vegetarian sources get converted into the the long-chain fatty acids that our bodies need. This is according to a special report on “Omega-3 Fatty Acids and Cardiac Arrhythmias: Prior Studies and Recommendations for Future Research” in Circulation, the official journal of the American Heart Association.

One of the authors of that report, Dr. Bill Lands, told me later that the proportion our bodies convert goes up somewhat when we consume less omega-6 fatty acids, which compete in our bodies with omega-3. But few if anyone of us can reduce our omega-6 levels enough to rely totally on chia or flax seeds for our omega-3 requirement.

Almost everyone relies on fish or krill or fish oil for the omega-3 fatty acids we need. Although fish is the ultimate dietary source of omega−3, fish do not synthesize it.  They obtain it from the algae they eat. Then, why not bypass the fish and go directly to the source?

Actually, many vegetarians have for years been getting one of these two crucial omega-3 fatty acids directly from algae. Several algae-based products containing DHA (docosahexaenoic acid) are available. But I have never been able to locate any product that also contains the other crucial omega-3, EPA (eicosapentaenoic acid). 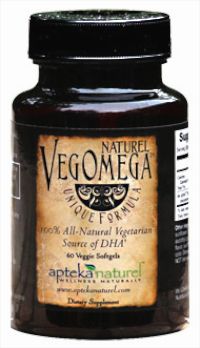 When Katelyn Ludwig, a spokesperson for Apteka Naturel, told me about a new omega-3 supplement called VegOmega Naturel, I was interested. “It’s a 100 percent natural source of omega-3 docosahexaenoic acid (DHA) derived from highly-purified oceanic algae,” she told me. “It is available through Apteka Naturel, an online store that specializes in natural supplements and exotic ingredients.”

Like other algae-based sources of omega-3, this new product lacks EPA. But then, when I told her of my concern, she replied, “We are also aware  about benefits of combination of DHA/EPA. A vegetarian source of DHA/EPA oil just very recently became available. Apteka Naturel is currently working on the next generation of vegetarian products, which will contain this combination.”

That really captured my interest, and I asked her when we could expect to have the vegetarian source of DHA and EPA. She finally told me yesterday that the company is estimating that it will be this August.

If you are considering adopting a vegetarian diet, you may want to wait until then. I know that’s what I may do myself. I am now essentially a pesco-lacto-ovo vegetarian (one who who eats fish, dairy products, and eggs). But I may be able to skip the krill oil and pesco.

If Pesticides Cause Diabetes, Will Organics Help Us?