When Anton H. (Tom) Clemens invented the first blood glucose meter 30 years ago, nobody could have predicted how important these meters would become in the lives of people with diabetes. But today, if there is one thing that unites us all, it is this: testing, testing, and more testing. 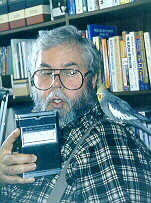 Tom Clemens told me recently that his work on what became the Ames Reflectance Meter had been "a hobby" of his. Now a consultant in Madison, Wisconsin, in the 1960s he headed the Ames Instrument R&D Department at Ames Company. It was then a division of Miles Laboratories in Elkhart, Indiana, and is now part of Bayer Corp.

He says he started working on the meter in 1966. During 1968 he built several prototypes for field trials and filed a patent application in April of that year. The U.S. government issued him patent 3,604,815 for the meter on September 14, 1971, about two years after it went on the market.

The Ames Reflectance Meter was expensive and required a prescription. It was also rather large and heavy.

Tom Clemens loaned me his meter, which I have on my desk as I write this column. It is 6 1/2 inches tall by 4 inches wide and weighs almost two pounds. It has only the faintest family resemblance to any of the meters we use today.

But the Ames Reflectance Meter led to the Eyetone, then to the Ames Glucometer, and eventually to the great variety of blood glucose meters we have today. In the United States alone nine companies now sell 30 different meters that will let you test your blood glucose at home.

Four of these companies account for 80 percent of the meter market, according to the Frost & Sullivan market research firm in Mountain View, California. They are LifeScan (a Johnson & Johnson company), Boehringer Mannheim (Roche), Bayer, and Abbott Laboratories (MediSense).

The list price for these meters ranges from $30 to $200. The amazing thing about them, however, is that if you have an old meter to trade in you can get most of these meters free. Even if you don't have a trade in, rebates of up to $40 are available.

Six of the nine meter makers offer rebates on some of their meters.

These meters vary somewhat in the precision and accuracy of their measurements. Which meter is best can be a subject of fierce debate.

All of the meters, however, meet certain minimum Food and Drug Administration requirements. Any of them can help you use testing as a management tool. If you get high test results, take it as a signal to get more exercise, change your diet, or change the type or amount of your medication.

The main problem with blood glucose meters today is sore fingers. The American Diabetes Association's Consensus Statement on Self-Monitoring of Blood Glucose recommends that people with type 1 diabetes in intensive therapy should test at least four times a day. Even people with type 2 in good control are encouraged to check twice a day.

That number of regular punctures can get old real fast. For now you have several strategies available to minimize the pain. Test on the sides (not the pads) of your fingers, vary the test sites, and use fine-gauge lancets that you change regularly.

In the long term, several non-invasive and minimally invasive meters are expected to be available soon. I counted 21 companies working on these painless meters on my Blood Glucose Meters Web page.

Meanwhile, don't stop testing with your old meter, even if it hurts. You can even give thanks to Tom Clemens and all the engineers who followed in his footsteps who have made it less difficult for you to control your diabetes.

The American Diabetes Association originally published this article on its Web site as one of my “About the Internet” columns.